C Northcote Parkinson was born on this day in 1909.  He would like to have been remembered as a naval historian, having started his career as a historical researcher at a ridiculously young age.  His biography of the charismatic Admiral Edward Pellew, Viscount Exmouth was published when Parkinson was only 25.  He wrote a number of other nautical books: 8 naval histories, half a dozen novels and even a biography of a fictional naval character: The Life and Times of Horatio Hornblower.

But he is more widely known for his Law "Work expands to fill the time available for its completion", which was born the same year as Scott Adams, creator of Dilbert. The aphorism was expanded to a book of essays called Parkinson's Law: the pursuit of progress - a series of pre-Dilbert dissections of the follies of bureaucracies.  Anyone who has worked in an office, or like me, in an Institution, will hear the ring of truth as they read the book even though it was published nearly 60 years ago. 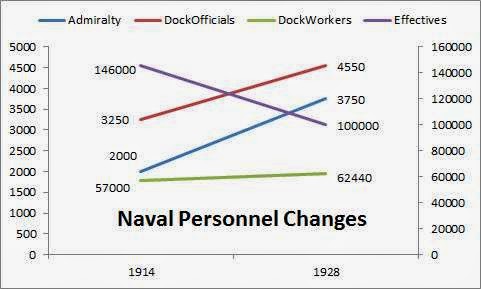 The two themes in Parkinson's life come together in this graph (which I've drawn from data in a table in his book) which shows that as the number of battleships fell from 60 to 20 between 1914 and 1928, the number of naval officers and ratings (Effectives) fell by only a third.  At the same time the number of people pushing models of ships about on tables in the Admiralty increased by nearly 80%.  The figures for dockyard 'maties' and dockyard indent-in-triplicaters followed a similar trend but not so extreme.

See you at the coal-face!
Posted by BobTheScientist at 07:41