When we were nippers, living in a wide variety of places not in Ireland, we came every year to Duncannon.  The strand there is split by a modest stream and occasionally, by Herculean efforts with a small tin bucket and two tiny shovels, we were able to dam this rill-beck-or-leat to make a wee bit of a pond between the dunes.  It was, of course, unsustainable. The water kept coming from the drain on the other side of the road and we  shovelled quantities of wet sand atop the berm as the water rose.  But with no Little Hans Brinker (the Hero of Haarlem) to put his superhuman finger in the dyke, eventually a small failure would grow to a catastrophic collapse.  We achieved damnirvana one Spring when an elderly couple walked their dog to the far end of the strand while it was artificially dry from our exertions, and couldn't get back after the inevitable hydro-engineering failure had re-established the river. 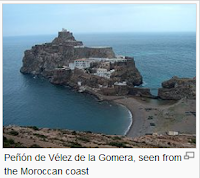 I think of that story when I reflect on the fate of Peñón de Vélez de la Gomera which used to be an island but now, as you see from the picture, is not.  Its island status was important because that made it Spanish when the rest of Morocco became independent in 1956. As an island it was one of the plazas de soberanía which had been Spanish since long, long before Spain joined in the pork-barrel imperialism of the late 19th and early 20th centuries and in 1912 acquired a Spanish sphere of influence in Morocco. We sometimes forget that the Canary Islands are just off the West coast of Africa.  And, unless you're a Spanish school-child it's easy enough to forget that there are two substantial Spanish exclaves on the African mainland - Ceuta (80,000 people in 20 sq.km.) and Melilla (75,000 people in 12 sq.km).  The plazas de soberania are mostly rocks and islets strung out off the North African coast, many of them nests of corsairs before being acquired by Spain.  And so was Peñón de Vélez de la Gomera (http://goo.gl/maps/mauY0) until a torrential thunderstorm in 1934 caused the wadi 400m East of the fortress to spew a monumental quantity of sand out to sea.  Since that time the island has been an isthmus. I think we should cherish these few zany territorial fragments of historical accident that remain - especially when, as here, no civilian residents are involved.  So I'll be happy to get my bucket and spade out of the attic and dig a channel across the isthmus to get the re-islandification of Peñón started.  Maybe I'll take the grand-daughter, she needs some experience of practical engineering.

Posted by BobTheScientist at 05:48