My stuff and clutter

I was out in the back-shed looking for more flour (it's where we keep the shot-gun and baked beans in anticipation of Armageddon), and noticed that we have 100 used egg-boxes (I counted, must _ have _ data), and I'm sure we have at least 100 empty jam-jars waiting for the raspberry harvest..  That's any aspirations I might have towards 100thingchallenge blown!  So I don't really have a stable platform from which to be barracking people who have tried to get closer to a simpler lifestyle even if their 100thing list reads like the contents of a Louis Vuitton over-night bag.

There have, however, been two periods in my life when I lived with much less than 100 things. 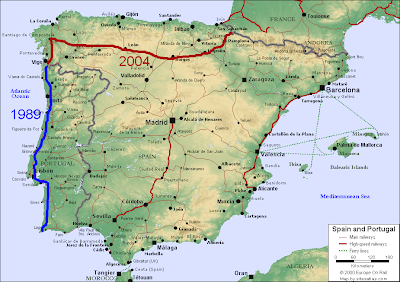 In 1989, I retired from working-in-science-for-money and took a 700km stroll along the Atlantic coast of Portugal.  15 years later, in 2004, I retired again, took up almost where I left off and walked from the Rio Minho to Santiago de Compostella, turned sharp right and headed for France.  That was about 800km.  Clearly the key idea here is retire early and retire often.

Compeed plasters are meant to prevent the development of blisters, but I never used mine after I was told that they were as likely to lift the whole area off as stick it down.  I lanced my blisters with a needle and swabbed 'em in alcohol, me hearties.  My 50ml bottle of alcohol leaked over my journal early on (dang-and-blast!) and I never re-filled it.  I threw away the razor and grew a beard.  I stopped using sun-block and rolled down my sleeves in the middle of the day.  I didn't have a cell-phone and I left my camera at home thinking it was better to live the experience rather than record it.

I've rarely felt more alive than at those times. On the second 2004 leg, I shed 12 of my then 85kg in six weeks.  Which was great because dicen que, for a sustained and sustainable trek, your rucksack should not weigh more than 10% of your body-weight.

When I was about half-way between Santiago and France, I met a young Dutchman; he was dressed in lycra and had only a small bum-bag containing a purse, a shower-proof poncho and a spare pair of knickers. Apart from that he was toting a kilo of muesli, a bottle of water and a cow's pelvis, which he'd picked up the a Pyrenean  meadow and brought along for the ride. Now that's travelling light!