. . . in Abkhazia, today "celebrating" events in 1993.  I bet they don't cover world political geography any better in school now, than when I was scrabbling an education in the '60s and '70s.  So you may be unable to answer:
Q.  Which is the odd one out and why: Abkhazia, Altruria, Atlantis, Azania, Azkaban
with a fully confident:
A: Abkhazia - the rest are fictional islands.  And thar she blows (on the left, on the coast, in the pink):

The independence of Abkhazia is de facto since the last sweep of ethnic cleansing ousted the remaining Georgians twenty years ago but its autonomy is recognised by only a handful of other states: Russia, Venezuela, Nicaragua, Nauru, and Tuvalu.  Also by South Ossetia, Transnistria and Nagorno-Karabakh although the legitimacy of these fragments is itself in some dispute.  You can see S. Ossetia, semi-visible like a tumor in the middle of Georgia in the map above.  Vanuatu recognised Abkhazia in May 2011 and withdrew it in May 2013, and all (both?) the Abkhazians who were able to avail of the benefits of visa-free travel to the Pacific island paradise were abruptly discomfitted.

Living in a republic that is not quite a 100 years old, and having a grandfather who was surprised and delighted to secure a government post and a pension from the earliest days of Saorstat Eireann until he retired in 1947, I have some sympathy with the urge for independence.  Grampa was surprised to the get the Harbormaster's billet because he was protestant, from a big house and he hadn't been in the GPO for  Easter 1916 - he preferred to spend part of that spring freezing one lung to oblivion in an unretrievable Royal Naval observation balloon 400 feet above the North Sea.
And if "nations" like Nuaru (pop 9,400, area 21km2), Tuvala (pop 10,700, area 26km2) and S.Ossetia (pop 55,000, area 4000km2) can go around recognizing each other without the rest of the UN falling about laughing, then how long before we see the Republic of Cork (pop 500,000, area 7500km2) and the Kingdom of Kerry (pop 146,000, area 4750km2)?

But enough of these anecdotes, show us the data!  And that is not without interest.  If we look at when countries choose to celebrate their Independence Day, there is a demonstrable excess in the late summer months of Jul, Aug and Sep.   I take my data from Wikipedia and with a pinch of salt as it reports Ireland's Independence Day as 24th April 1916 which is about as realistic as calling 21st June 1798 or 29th July 1848, Irish Independence Day.  We, being a staunchly religious country, rather celebrate Saint Patrick's Day - with a military parade, politicians on the podium, and a lot of dhrink - as other countries do their ID. I wonder if choosing when to have an ID National Holiday is like Mrs Windsor Next Door having an Official Birthday in the summer when the weather is better for watching a march-past.  Or does it extend back to when armies tended to march about in the summer (think 1798 in Ireland) and so were more likely to precipitate the key independence event. 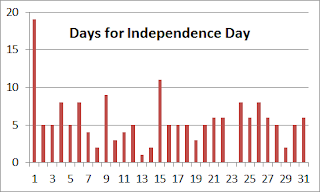 The Independence of Convenience hypothesis is somewhat supported by noting the excess of IDs on the first of the month.  I got marginally excited at the fact that only one country (Central African Republic) celebrates its Big Day on the (unlucky?) 13th, until I noticed that no country had chosen the 23rd.  Even merging the 10/11 cases where the 30th or the 31st is the last day of the month, that date is still dwarfed by the pile for the1st.  A new day, a new month and new country?  Very forward looking, indeed.