One of the harmless processes that helps cement social relationships between domestic and foreign is to "twin" towns. I've no idea how these relationships are set up (Mayor went on holiday there seems most likely) and Navan, Co Meath can't make up its mind, being twinned with both Bobbio and Broccostella in Italy (Chairman of the Chamber of Commerce went on holiday somewhere else?).  But it can work out to widen the cultural relationships as when I encountered Gelsenkirken.
From the other side of Europe we see Україна Ukraine as through binoculars the wrong way round: a long way away and rather exotic  . . . but it's about 7x the size of the island of Ireland when the binoculars are the right way round. As they are likely to join us in the EU before we're all dead and because they are definitely part of geographic Europe, we should pay more attention. 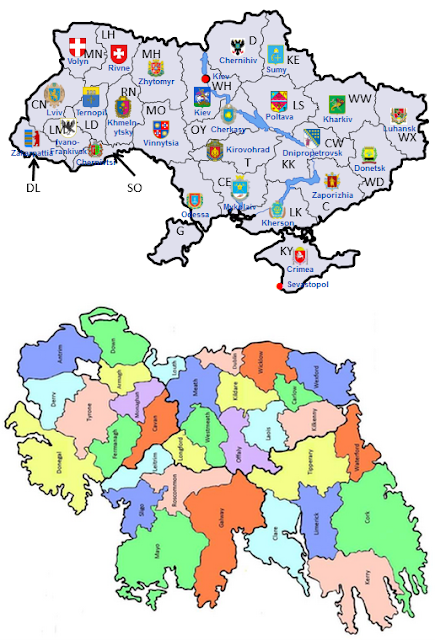 Now I think it's fair to say that the average Irish person knows damn-all about Ukraine (we've been asked by their government not to call it The Ukraine anymore). They might, if prompted, think 'cossacks'. Football fans will have heard of Dynamo Kiev. Historians of the more distant aspects of medieval European history might know about the Viking foundation of Kievian Rus - it was on the way from Scandinavia to Byzantium by river and portage.  Of course we've all heard of Chernobyl because of the heroic efforts of Adi Roche and others nurturing the orphans who were part of the fall-out.  And I had my own alcoholic encounter with Chernobyl's Caesium.
But I daresay fewer still will have paused to reflect on the remarkable similarity in the outline of our two countries.  Perhaps because it only becomes obvious to all when Ireland is tipped forward on its face, as some of its citizens are liable to do after a Saturday night on the batter.  And it turns out that as the Republic of Ireland is divided into 26 counties (I'm going to ignore The North until Ukraine and Belarus become one nation), so Ukraine is divided into 24 Oblasts and the Autonomous Republic of Crimea = 25.  So we can do a pretty good geographical 'twinning' without wrenching the true topological geography too much.  See the map of UkrEire above and the table below.

Table 1. Oblasts of Ukraine meet Counties of Ireland
I've had to take some liberties.

I won't be shifted on the sub-division of Dnipropetrovsk, however, anyone from East of the Dnieper is welcome to visit us in County Carlow.

Other mappy links on The Blob: BorrisOS -  Tramore - MtLeinster:25000 - Crowe's
Posted by BobTheScientist at 07:28