I wrote a tuthree days ago about a rather good vehicle for encouraging (critical) thinking - estimating the height of a real tree whose photograph is supplied so that nobody goes off and measures the shrub next door with meter-rule.  As I said then, I've been posing this question to several dozen teenage scientists over the last several years.  So much of the science curriculum is trying to replicate the experiments of Zipf, Hooke, Newton, Wallace, Hamilton, Lavoisier or Kolmogorov  rather than finding out something that nobody else knows.  A little known study by Dorian Pritchard found that boys with end-of-alphabet surnames fared significantly worse on important exams in medical school than those whose names began with A B or C.  I haven't seen that study replicated but you might speculate about why it might be true if it was. ANNyway, I wasn't going to risk letting team "D" have their self-esteem eroded so that they couldn't think straight, so I gave everyone in the room a chocolate bar for energy and a random slip with either Team Alpha, Team Prime, Team Top or the A-Team on it.  The randomisation was to break up the cliques and enforce a bit of mixing of ideas - we had already insisted that we wouldn't accept two kids from the same school on the programme.

There is no correct answer! When the wind blows the tree's height changes; it possibly changes height during the day as transpiration alters the turgor pressure; probably changes by season as the leaves weigh down the branches;  and it certainly changes height year by year.  But there are plenty of wrong answers: it is clearly not 50kg high, or 500m or 500mm and if you're being scientific you should include an estimate of the error associated with your answer.  Most importantly there is for certain sure no single method for obtaining the answer.  So I urge you to think out your own uniquely creative and clever solution before trudging below the fold in the footsteps of some random 15 year-olds.
Last chance!

Here are some of the answers:
1)  2.5 rugger goal posts - a good stab but not very useful if you wish to have a pissing competition with the University of Budapest about who has the tallest tree and they've never heard of Rugby let alone seen just how tall the goal posts are.  Not for nothing was Latin the language of educated discourse for 1000 years - it minimised misunderstanding.
2) 17 Seans.  Sean, being the tallest team-member, was required to stand next to the tree while the others stepped back across the rugger pitch and estimated how many Seans would need to stand on the shoulders of Seans to be the same height as the tree.
2a) 100ft as a conversion from Seans to feet: the lad being 6ft tall.  The same issues apply here to measuring in rugger-posts.  Those Hungarians don't know how big a foot is.
3) put a metre-square cardboard standing adjacent to the tree then step back and digitally photograph the tree.  Put the photo onto a computer and use the square for scale to establish height.
3a) . . . but you have a photo already and the cardboard square can be replaced by bricks or windows in the adjacent building.  Measure one brick - count bricks - multiply together - multiply by 1.6 because the tree is 3.4cm tall and the building only 2.1cm.
4) "The native North Americans used to stand with their back to the tree, mountain, cliff in question and bend over to scrutinize the object through their own legs . . . "  the proposer of this method got a little lost at this stage as to how to progress it to an answer in Seans, Rugger-posts or meters.
4a) What the NNAs might have been using was the method of similar triangles. The bending over being a way of getting the eyes close to the ground.

It just needed Combs-Hair-In-His-Teepee to stand between the observer and the tree so that his magnificent coiffeur seemed to graze the tree top. This is a method I was taught in maths class when I was about 9, and similar triangles are certainly on the Junior Cert curriculum but this solution to the problem is rarely articulated and only once actually employed to get an estimate of the tree height - in paces! 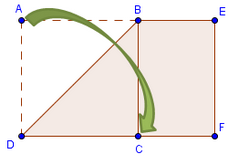 4b) A special case of this it to construct a 45 degree set-square from a sheet of paper (often used to convert A4 to a square before folding some extraordinary origami).  Then you don't need Sean or C-H-I-H-T to act as a stooge, but can use the half-square as a sextant and line up the bottom edge with the tree-foot and the hypoteneuse with the top-leaf.  When the two line up, your eye is a tree-height distant from the tree itself.

5) Trigonometry?  This has come up many times, more usually in the Socratic discussion than 'in the field'.  Many teens know that Tan =O/A because they have rote-learned SOH-CAH-TOA and this can be used to solve the problem so long as a) you have a sextant or at least a protractor to measure the angle and b) you have a set of trig tables (or a scientific calculator).  I've seen a nifty Ap that tells you what constellation your phone is pointing at so there must be some angle-measuring device embedded and a smart-phone will quickly retrieve your trig tables.
6) "Pace out the shadow at midday on the equinox while knowing the latitude or declination or something?".  This is getting close to an articulation of the method Eratosthenes used to calculate the circumference of the earth but won't work in the present case because the tree stands at the N side of the open ground and will cast its shadow over the roof-scape.
7) Pythagoras!  I can't see how this helps but it's often come up in discussion, probably because both his theorem and trigonometry involve triangles?
8) Your answer here  ...

Moving on and up from trees to the moon, it turns out that the moon has a diameter of about 3400km and an average distance of 384,000km - the ratio between the two distances is about 0.9% or 9 parts in a thousand.  This is very close to the ratio between the width of your pinkie finger-nail and your arms-length and mine - smaller fingers go with shorter arms. You can verify/refute this next time you see the moon.  The moon's orbit is quite eccentric, however, its closest distance (perigee) is about 10% closer than its furthest (apogee).  Easily enough to be measurable by an ordinary person.
Posted by BobTheScientist at 16:38