A star is born every minute

Yesterday I wrote about being happy because it was Barbara McClintock's birthday, partly because she was one of the truly great original creative thinkers of the 20th century, but also because her capacity for happiness was so inspiring.  17th of June was Francois Jacob's birthday for 93 years until his death last month gave me reason to celebrate his long life.  I was born at 0050hrs in 17th June in England, so I have a choice of birthdays: either today because it's on my birth-cert or, because I jeer at the absurdity and hubris of jigging about with the clock each Spring and Autumn, yesterday because that was the date in GMT.  This option was borne in upon me when I was a teenager and used to calculate and construct birth-charts for myself and my friends - poring over tables and then getting out a compass, protractor, foot-rule and a fine black Rotring pen.  The first instruction was to subtract an hour if you were born in the BST season and then if necessary look up the tables for planetary positions of the previous day.

I calculated a birth-chart soon after The Boy was born in 1975 because I had the tables and the mental toolkit well-polished.  When Dau.I and Dau.II were born in the mid-1990s, however, the 1900-1975 tables I had didn't cover those years, so I let the whole thing slide.  One of the earlier tools that became available on the WWW interweb were robots that would take a submitted time and place of birth and calculate a chart showing where the planets were on the ecliptic at that time. So I was well late, but I did eventually get charts made up fo0r the girls as well.  I think such a chart makes a very acceptable, even framable, gift.   And because my readers (hi both of you) are insatiably curious, I'll show you mine here: 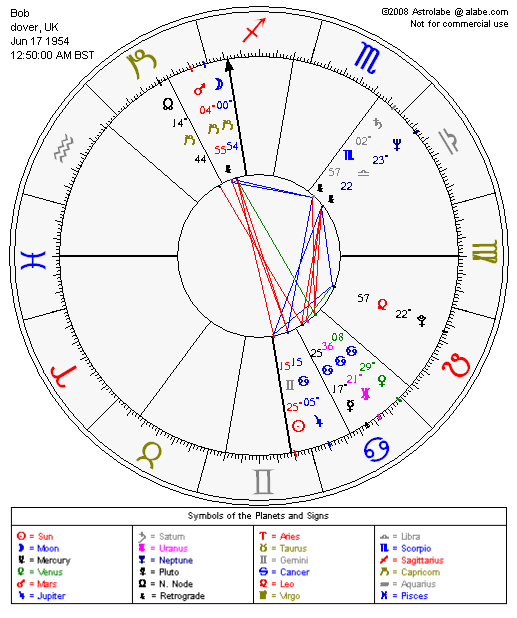 You must compare yours to see what is the normal/allowable variation.  There is plenty of choice for robot: just Bing up "birth chart calculator".  A couple of things fall out from the chart 1) the sun is at the bottom which means that I was born close to midnight (yup!) 2) the moon is almost exactly opposite the sun which means it was close to a full moon that night (yup!) 3) all the planets are crammed over on one side of the sky - dunno what that means 4) Mars is very close to the moon - dunno what that means either.  I like to make sense of the world, so I turn to experts in interpreting what birth-charts mean. Let's look at just a small part of one such site:
<deletia>
Uranus is in 21 Degrees Cancer.
For you, and for your peers as well, the demand to be free from entangling emotional bonds is of paramount importance. You have a unique and unfettered view of family life and will be attracted to experimenting with freeform styles of relationship commitments. This may lead to a rootless, unsettled lifestyle.
Neptune is in 23 Degrees Libra.
You, and your entire generation, idealize all of the various experimental approaches to relationships -- including "living together", the formation of communes and collectives and the whole concept of "open" marriages. There is a stress on weakened commitments on an emotional and contractual level, but there are heightened expectations of the level of commitment and mutual support on the spiritual and metaphysical level.
<deletia>
For you, peer review of a life experimenting with genez of various living forms and collecting data to test.
It's uncanny how accurate these can be.