Taking the bell through

When I was in high-school I had a two-year affair de la tete with my mentor and biology teacher Mr Wilkinson.  Many and varied were the stories he told us, lots of them off-topic and several off-colour ("Q: How tight is a duck's arse? A: Water-tight" eee how we larfed) but many of them have stuck with me and some stuck by me in the 40 years since I said goodbye-and-thanks.  One tale concerned a bell foundry.  Each laborer there had his own task.  One would weigh the copper and tin and  a pinch of magic into the crucible, one would tend the fire, two more would pour the molten bronze into a mold made by a third, another would tune the bell by chipping flakes off the inside with a cold-chisel, and the two apprentices would polish the final product until the Master Founder was well-and-truly satisfied.  Each man was, or was becoming, an expert in his craft, and each knew that he was dependent on those who came before and after him in the production process.  This sense of incorporation was made concrete by each man periodically taking the bell through.  To do this he had to perform all the tasks in order and stand over the final product.  If nothing else, this made clear that each task had integral value and that even the polishing required patience, application and attention to detail.

I've just come from a meeting with some of my colleagues to thrash out when and by whom the elements of molecular biology were going to be taught next year, so that when the students emerge from the four-year course they can claim a well-rounded and broad-enough mastery of the subject.  That's aspirational, but let's hope that we can get closer to the ideal having started communicating amongst ourselves.  One benefit has been to find out who is master-minding the 3rd Yr course Molecular Biology & Immunology which I'm going to be contributing to next year.  This MM has put together a set of practical experiments that is informed by him having just finished his PhD in molecular biology.  Each week the students will carry out a task (or two) in a protocol that will discover something that nobody else knew when we started.  It's a high risk strategy because of the dependencies (if the process founders at Step 7, there's not much to be done about Step 8) but the potential rewards for learning and self-esteem are mighty.  So much learning even in university follows the Wenceslas School of teaching:


In the master's steps we trod
Where the science lay dinted
Heat was in the very sod
Which the {Hooke|Joule|Krebs|Luria} had printed.

that it's great to be doing real science with The Yoof.

It reminded me of my own undergraduate career in the last century, which was rather less inspirational, for much of the content, than my experience with "Old Wilkie" (who was/is probably only ten years older than me).  Even when you're taught your Intro Physics by a Nobel prize winner (ETS Walton - Ireland's own/only science Nobellist - in his last year before he retired), it's still a drag to be tricking about with springs  to replicate Hooke's law Ut tensio, sic vis almost exactly 300 years after the autodidact had sorted it out for all time. 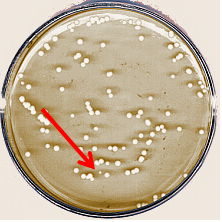 But in my second year, one of the lecturers came back full of beans from a sabbatical stint in Davis, California.  He wanted to identify and isolate a particular class of "petite" mutants in yeast, so that they could be mapped w.r.t. similar already known mutants.  They were called petite because their mitochondria-challenged colonies grew small.  The rate of spontaneous mutation in baker's yeast Saccharomyces cerevisiae is about 1 mutation in every billion DNA bases per cell division.  You might guess that mutations in 1000 of the bases in the genome would sufficiently challenge the mitochondria to make the cells grow petite.  That's a guess based on: a gene being on average 1000 bases long; several sensitive genes being involved in normal growth; and several of the mutations being sufficiently benign as to be undetectable on a petri dish.  So every 1,000,000 cell divisions you might hope to see one tiny slow growing colony.  What better, thought the Machiavellian Dr California, than to have 5 dozen students spread suitably diluted yeast  cells on hundreds of petri dishes for a few weeks and look for dinky colonies, like the one red-arrowed here.  This was boring, repetitive, painstaking work that went on forever . . . and I was stoked! It was the high-point of my week after week - would I find a petite colony? would any of us find a petite colony? would a petite colony be found in our lifetimes?  I was being respected as a co-worker, I was doing real science, I was pushing the frontiers.  If next year we can get a couple of students to feel something of that passionate engagement, it will have been worth it.


Posted by BobTheScientist at 16:25