If I am to continue with a bit of light mentoring of the yoof at CodoDojoColo, I have to get myself Garda-vetted.  There is a unit of the Gardai whose task is to root out those whose past renders them unsuitable for the present company of minors.  It cannot be a blanket ban on anyone who has a criminal record because a bit of larceny or drunk driving (however reprehensible that may may be) should not preclude you from helping youngsters become better programmers and better people.  So I hope I get my appro but the lads at Vetting Central are going to have their work cut out to follow up all the data that I have been required to enter on the form.  Jakers, I had difficulty trying to be a scrupulously  and completely honest citizen on this question:
Please state all addresses from year of birth to present date
with lines for up to 22 places you've lived.  I needed 24 slots because for most of my childhood I was a navy brat - changing homes about every 18 months as my father got new postings.  I also needed help from my aged mother because I couldn't remember the street in Kingston, Ontario where we spend a year when I was rising 3.  Even she couldn't recall the street although she knew it was #11, in the oldest part of Kingston and opposite a Park that was flooded for skating in the Winter. With that much info and google maps I was able to make a pretty well informed guess about the street.  Google Maps wasn't a lot of help tracking down 11 Harold Terrace, Dover, England: a dreadful kip that my poor mother and her three weans had to stay for several months before the Canada gig.  There has been a fair bit of urban renewal in the East End of Dover and I'm supposing that the whole Terrace was bulldozed decades ago as a health hazard.  The same fate has evidently befallen the wholly memorable Cardiff address - 69 Cistern Street - where my father-'t-law lived with his parents and 12 siblings in the 1930s.

So what's the point?  I suggest that the "from year of birth" part of this question on the form is officiously intrusive, difficult to complete and so has the effect of encouraging dishonesty - if you can't remember the house number or the postcode it's tempting to erase that part of your life and tell the vetters that you lived longer in the previous address.  Investigating the 'investigations' that me and my pals carried out aged 8 is so silly that it calls into question the efficacy and even the desirability of whole vetting process.  When you have urban dual carriageways with absurdly low speed limits it encourages folks to break the limit there and by thin-end-of-wedge extension to break the limit and the law elsewhere. 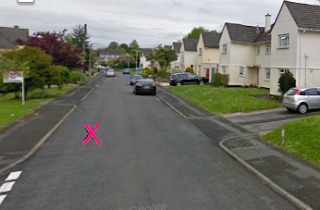 The silver lining of this whole process is that I have been nostalgically stalking the places where I grew up.  The pink X marks the spot where, in about 1962, I came off my bicycle head-first over the handlebars and filled my knee with gravel on landing.  One piece of that gravel surfaced several years later like the whoosits from Alien.  The house on the extreme right is where I was taken to be first-aided by Mrs Thwaites, a trained nurse and mother of a ferocious girl named Siobhan whom everyone except her parents called The Battle-Axe.  There you are, that's of no conceivable interest to anyone except me, my sibs and the poor feller who married Siobhan.
Posted by BobTheScientist at 19:37