The measurement of trees often requires quite creative guesstimates.  I'll get back to you about how to measure the tonnage or board-feet available in a woodland after I've talked to my friend Chris Hayes, Forester Sans Peur et Sans Reproche.  This is one of the many tasks he is called upon to do, when pricing the value of the timber or estimating how long it will take him to clear-fell the trees and shift them to the road edge. Nobody in Ireland shifts the trunks to the waters edge and floats them down-stream in the inherently romantic but inescapably dangerous way of North American lumberjacks illustrated in the 1930 archive film From Stump to Ship.  It is not sensible to count every tree and measure its girth, nor is it economically prudent to take a glance out of the window of the ould Landrover, make some meaurements on Google Satelliteview and take a wild punt.

I can't even sharpen a chain-saw properly, so I'm not much of an asset in the forest.  All that book-l'arning ain't worth squat out there.  But when it comes to measuring the height of a single tree in a manicured park, then I can contribute.  I've had a lot of help in this task over the last half decade from several batches of Transition Year (TY) interns who came to The University (where I "worked" before I started working at The Institute in January) for a week's work experience.  Transition Year occurs in some Irish schools immediately after the national mid-teen examinations (Junior Certificate) and before the poor creatures launch themselves at the two-year Leaving Certificate course to graduate from secondary school.  The interns came for some experience working in a science laboratory.  But my boss decided that they would get all wan and pasty if they were indoors all week and that they should also get out to explore the beautiful  and inspiring University campus. 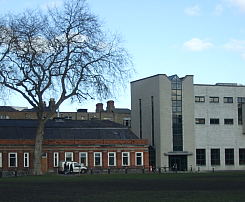 So I put together a scientific treasure hunt to give their investigations some structure.  I love treasure hunts.  The TY TH consisted of a map and a dozen or more find-me questions illustrated with pictures.  One of these questions was "What is the height of this fine plane tree next to the Civil Engineering Building?"
An integral part of the TH each year was the post-mortem discussion and de-briefing when each of the several teams of interns got a chance to tell us their considered answer and reflect on the, often wildly different, estimates of the other people.
We got some strange and creative ideas over the years but hardly anyone ever applied the "mathematics" that they had just sweated blood from their eyeballs over during their Junior Certificate.
This discussion sometimes gave me a chance to share one of the great urban legends of creativity in science which is usually attached to precociously sassy student Nils Bohr long before he won his Nobel Prize:
He was set to fail his Physics Exams because he hadn't deigned to answer the question "How would you use a barometer to calculate the height of such-and-such tall building".  But two of his professors asked him to a viva voce examination to redeem himself because he showed promise.  Still refusing to give the "physics" answer involving the relationship between atmospheric pressure and height, Bohr rattled off a dozen solutions to the problem as stated.  These have been gathered together in a famous essay by Alexander Calandra and include
These methods would work just fine for measuring the height of the Simon Perry Building next to the tree - so long as you can find a barometer. The Leaving Certificate method of working out how tall is the tree is to look up the 'answer' in the back of the book or wait for your teacher to tell you what that answer is and then memorize it - it may come up in the exam.  Bob's method of working out how tall is the tree is to THINK for longer than a television commercial.  And if that's not enough, then think for longer than an episode of QI. Then go to sleep, and you'll have some sort of answer in the morning - works for me almost every time.
Answers in the comments please.  Precociously sassy answers def'ny allowed.  I'll show you mine after you show me yours.  Ladies and gentlemen, commit!
Note added 13Jun13: you can get a few different solutions to methods that work.
Posted by BobTheScientist at 23:07