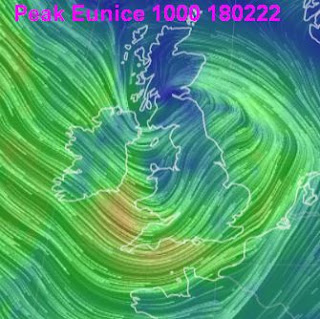 It was the week of three named storms. After Arwen in November, I can only suppose that somewhere in the WEA experienced Barra and Corrie but it didn't make the news or raise a breeze in our part of the archipelago. Storm Dudley was, au contraire, certainly a secure loose objects thing. Two days later, on Friday, Storm Eunice barrelled through the Southern half of Ireland with even more fizz. The SOP after a stormy night is to check the lane for tree down at first light to see if we could go to rescue their neighbours if it was needed - indeed vice versa. Then breakfast. It was gusty all through the morning of Friday 18th Feb and about 1100hrs, during a lull in the buffet, I got out of my jim-jams [I R retire!], dressed for the outdoors and went to count the sheep and see if anything gravitational had happened over night. Nada.  But about an hour later I looked down the yard because something was aslant in the orchard.

It was a huge lump of ash Fraxinus excelsior which had broken off from our second tallest ash tree where the trunk splits into two maybe 4m off the ground. It was 30-40cm ⌀ in the base and 14m to tip of twig. Because ivy Hedera helix, it photographed as a great green wall but also because its fall had been broken by row of evergreen laurel Lauris nobilis coppiced from the felling of their parents in ~2008. 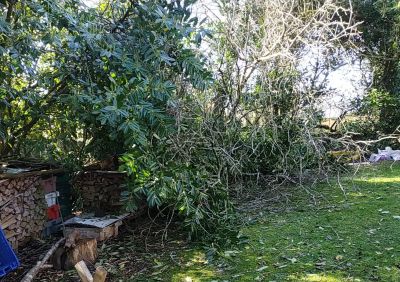 Much as I regret the loss of any tree, this fall was quite remarkably convenient. a) Saved us having to call Sean the Surgeon b) The last twigs merely brushed the top of the nearest woodstack c) I've been meaning to thin or pollard the laurels d) The heavy duty trunk fell parallel to, and 2m North of, the wire fence without touching it e) Winter = no leaves f) The logs, as they are cut, will be really close to where they need to be stacked!

As I R retire, I am fit poor but time rich, so there is no steaming hurry to process the wood.  Not least because two days after Eunice, Storm Franklin drove through the country on Sunday 20/Feb night. I felt we got a worse drubbing from this third-of-three storms; but you wouldn't have known it from the [lack of] twig fall around the farm. Believing in having one day/week without brrrm BRRRRM noise-pollution, I don't do machinery on Sundays. But on Monday, I fired up my little under-powered chain-saw to dismember the tree-fall into its component parts . . . resolving to stop when I got through a tank of gas.

On Tuesday, I had another session with the ch.saw cutting off and logging the remaining branches and the top 4m of trunk.

On Wednesday, before another spell of wet weather, I delivered another load of ivy to the sheep and raked all the twigs, leaves and raffle into a heap under the hedge. It's all looking quite ship-shape and bristol titties. A good chunk of split and stack to do; but like I say it's all in place for that.

Thursday morning there was a light dusting of snow but at tea-time a milky sun came out. I cleared the last of the 2016 cypress logs out of their home for the last tuthree years, rebuilt the end wall of their stack and started splitting and loading [Ash 2022] on the existing pallet. A lot done, more to do! Warm evenings in 2024 . . . if Europe as we know it survives that long.