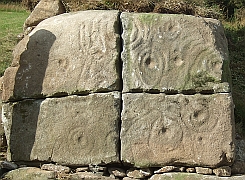 The Knockroe Ringstone [OS Map Sheet 68 Grid Ref S480827 52.5776, -6.7815] is one field away from Shannon's Lane, the easiest route to the Mt Leinster uplands from the Scullogue Gap to the South. Part of this stone (the bottom left in the picture above) was revealed when, in November 2007, the existing 2m gateway widened to 3.8m. The original artwork was carried out 4000 years ago (in Newgrange times) when a flat-topped 5 ton granite boulder was incised with a cup-and-ring-with-chevrons design by a Neolithic artist. It is useful to view the Ringstone in the context of other rock-art in the locality. This has been documented by Chris Corlett who wrote Inscribing the landscape - the rock art of south Leinster, the definitive book on the subject. The cover  of that book features the work of The Rathgeran Master a truly wonderful incised stone, 4 km due West, on the NNW side of a hill at Rathgeran, just outside Ballymurphy. 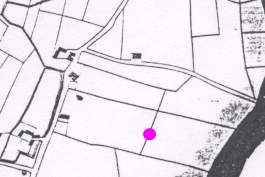 At the end of the 18thC, the hillside was settled, the  approx. 1 hectare fields cleared and the original boulder cleaved into manageable squared off blocks that could be piled up to make stable vertical walls at each side of a gateway. The line of the wall (and presumably the gateway) is present on the 1840 ordnance survey [L], so the splitting of the Neolithic slab occurred ~1800 CE.  The 19thC stone cleavers were not indifferent to their cultural heritage. But they recognised the stone as being a suitable size, flat on one surface and having 2 or 3 almost square faces already present. The "natural" right-angles suggested that the stone had two cleaving planes at right angles which they needed to make Lego-blocks for the verticals of the gateway.  The cup & rings may have been obscured by mud and moss OR may have convinced the cleavers that the grain of the stone was uniform and fine and so would split as they wanted.

In August 2010, under supervision of Chris Corlett, both sides of the gate-way were taken apart to get a proper look at the incised stones. From the disassembled 3-D jigsaw, it was clear that four of them could be reassembled into a single piece with a natural outside border, giving confidence that all the relevant bits of the incised face had been recovered. Three, apparently undecorated, top bits of the original gateway could also be reassembled and probably represent the rounded ‘back’ of the original boulder. After discussion over lunch (never good to hurry these things), it was agreed to reassemble the Ringstone a) vertically b) to form the end of the wider uphill wall. The back-of-the-rock fragments make up the downhill side of the gateway. In other words, now both its Neolithic and 19thC functions are fulfilled. It would be nice to say that you can’t see the join, but these are as clearly visible as the dashed line in the middle of a road. These are the marks where [oak or steel] wedges were driven into the stone to split it.