I have written with approval about Norman WEA Davies as a historian with a fine political ear for what people call places. I've also written an essay about the principal city of Silesia. These two threads of my blobby life came together with a clap when I ordered, and then read, all 500 pages of Microcosm: portrait of a central European city by Norman Davies and Roger Moorhouse. As a bonus there are an additional 80 pages of notes, references, appendices and indices and 80-something illustrations . . . and loadsa in-text maps.  Each of the substantive chapters uses a name appropriate to the age described: Island City; Wrotizla; Vretslav; Presslaw; Breßlau; Breslau; Wrocław. Davies is married to Maria Korzeniewicz and has lived for long time in Poland, so he has skin in the game but I don't find him without compassion for the Germans who were "repatriated" to The British Zone in the immediate aftermath of WWII. That crazy-talk is equivalent to me, a twig of Anglo-Irish stock, being invited / urged to go back where I came from. As it happens, I know the manor on the Welsh Marches, which my adventuring ancestor left for the Irish Midlands. 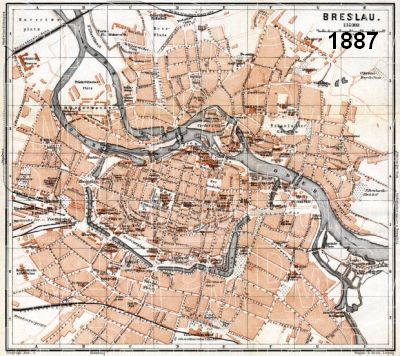 The take home from this book is that, for the last 100 years or more, people have been treating their neighbours like shit. And not just the Jews! Every ethnic or linguistic group that has lived on the banks of the Oder / Odra has been othered: identified, discriminated against, evicted, assaulted and killed . . . in absurd numbers and with casual, often state-sponsored brutality. The Troubles, with a death-toll of 3,000 over 30 years is in the ha'penny place; always acknowledging that there is no acceptable level of man's inhumanity to man. But 60,000 civilians died in and around Breslau between Jan and May 1945.

And not just the people, the fabric of the city was reduced to smoldering heaps in the Spring of 1945, when Festung Breslau became a designated fortress to delay the advance of the Red Army as it steam-rollered towards the Prussian heartlands and Berlin. As it happens, Hitler topped out and Berlin surrendered before the desperate survivors of Breslau. The Treaties of Yalta & Potsdam carved up Europe among the victorious allies; with the Soviet Union making the most territorial gains. It was like the Partition of Poland out of existence among the Romanovs, Hapsburgs and 1772, 1793 and 1795. These gains included annexing nearly half of what had been Poland up until 1939. The Poles living there [for centuries] were cleansed Westwards and a smaller area of was-Germany was cleared of Germans to settle them. Breslau became Wrocław and was substantively looted by the Soviets and then by the Warsaw government of Communist Poland. The central praesidium needed bricks and so sound buildings in Silesia were dismembered and shipped East. Nobody would claim Microcosm is a happy book; but it is instructive and revealing.

If you can't read the book, you can get a flavor of what it treats by reading Christian "Son" Davies' memoir about his Polish ancestors and some of the terrible things that happened to them.