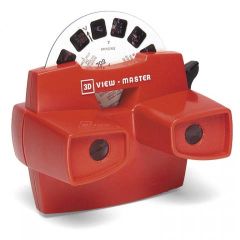 Back in time, before the war, when I was young, we didn't have RPGs, TikTok, or virtual reality head-sets. But The Man had to sell something to The Marks to keep the world of commerce turning. Hula-hoops came round to the shops in cycles and Lego and Barbie were always with us. Viewmaster [R] was one of the peculiar appropriate technology objects / ideas which were not really as exciting as their ads would have you believe. It didn't require batteries and it didn't make noises and it did show sort-of-stereo 3-D pictures  . . . of Venice, or Alpen folks in lederhosen. But the whole experience was rather disappointing.

The redoubtable Gdau.I is now 10 going on 60 with a decidedly quirky view of what she's interested in. Like most modern kids with earning parents not at the pin of their collar, she has access to a small dribble of cash from birthdays and uncles. Last week the kidder was browsing through the local charity store and plunked down £5 for a second-hand Viewmaster and a handful of the disks which it displays. That's really retro: to pick up on a piece of kit that was peaking its trend maybe fifty sixty years ago

I surely do hope that the health and safety aspects of Viewmaster have been properly explained to the child; because a Viewmaster caused her father one traumatic evening when he was her age. Thing is that Viewmasters, after the initial 10 minutes, are kinda boring. What does a curious 10 y.o. do with such an instantly obsolete bit of kit? Fiddle and, like. poke.  They boy contrived to push in one of the viewing lenses with his pokey finger . . . because it was there. The finger slipped in easy but was seized by the sharp internal edges of the aperture.  Having gone to bed an hour before, the poor chap came downstairs again with an inconvenient lump of red plastic attached to his index finger.

It could have made an interesting variation on the object-stuck-in-orifice-presenting-to-A&E annals {ho ho} which get reported in the medical journals at each year's end {ho ho ho}. Lucky for that 10 y.o., his father had a hacksaw . . . <CW: no child was harmed in the process>. Starting with the assumption that we'd be visiting A&E, it seemed unnecessary to present with such an embarrassingly addition to the child's fist, so I ring-barked the lens stalk which contained the finger and dumped the bulk of the machine in the trash. That made a visit to hospital significantly less mortifying. But before we set off I said trust me I'm a doctor and proposed that we slip a steel letter-opener between the finger and the plastic and cut down to the hole - if necessary from two opposite sides. And it was so, although not without a certain amount of anxiety on all parts. I was only 30 y.o. myself at the time: still young enough for what could possibly go wrong here?.