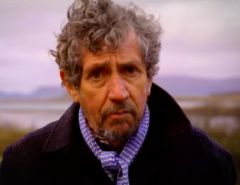 Charlie Bird, a leftist Irish big name journalist, has a diagnosis of motor neuron disease. MND is a horrible way to go. In the early 00s, a good pal of mine put his career on hold and came back to Ireland to care for his father after an identical diagnosis. Up until then, I'd imagined that the deficit of being unable to walk was a bummer, but perhaps surmountable. I hadn't realised that you need motor neurons to swallow. That presented a lower circle of hell to the nightmare. Our Charlie has decided to use the remaining power in his limbs to climb Croagh Patrick, Ireland's holiest high place. On 2nd April, possibly and tragically because he doubt that he'll be able for such a task on Reek Sunday [bloboprev], at the end of July; the traditional day for this arduous pilgrimage. And if your spirit and legs are willing but logistics are weak, Charlie is inviting you to walk somewhere else on that day. Preferably having shaken down your friends and relations to raise money for Pieta House, Ireland’s national suicide prevention charity and/or The Irish Motor Neurone Disease Association (IMNDA).

Okay, and fair enough. Me, I'd rather share my walk with buzzards than 100s of people but I can see that most of us need something to get us out to do something for the dispossessed because The Man is failing it big time, all the time. A few years ago, some of my actively christian neighbours elected to rehab the Cross which was constructed on the top of our hill during the Holy Year of 1950. I remember that Young Bolivar, our handy Venezuelano wwooffer went up the hill with them in 2016 when the cross was rededicated. I demurred because 20% of the party were the disagreeable neighbours to whom we haven't 'spoken' since 1999. The cross looks sprucer since the rehab meitheal - pity about the disintegrating half bag of sand, two broken pallets and a raffle of cracked plastic water containers.

At the end of January, this same neighbour announced that 1,000 people from Wexford were intending to walk up to the cross in solidarity with Charlie Bird. And that we couldn't, for shame, allow them to walk up a lane all tore up by the Christmas day flood. As Dau.II said "I don't get why people tidy the house when company is expected; I tidy up because I like living in  a clean house". Ahem, quite so. But you can't stop people who are determined on a course of action and on Thursday 03 Feb evening the county road was half covered with several loads of 1-down road gravel. Either 60 tonnes, 100 tonnes or €1,000; you choose. And we were called to spread it up the lane on the next Saturday.

Farmers are independent traders who might have €2,000,000 worth of property but earn less than the minimum wage from those acres most weeks of the year. They are not in the habit of being told what to do because they The Boss. Farmers are also, like surgeons, decisive! They get a thing done rather than piffling about over-long thinking about it. The very opposite of me for whom the perfect is always the enemy of the good enough.  Anyway, four of the neighbours turned up early each with a big front-loader on their tractor and another appeared with a venerable JCB back-hoe. Seven foot-soldiers were mustered with shovels and rakes to distribute 1-tonne loads of stuff across the lane from the heaps where the gravel was dumped. A while later, all the gravel had been brought up from the county road and parts of the lane were suitable for landing a light plane (with short wings) . . . and other parts were still a muddy mess. The pink arrow marks one such transition: 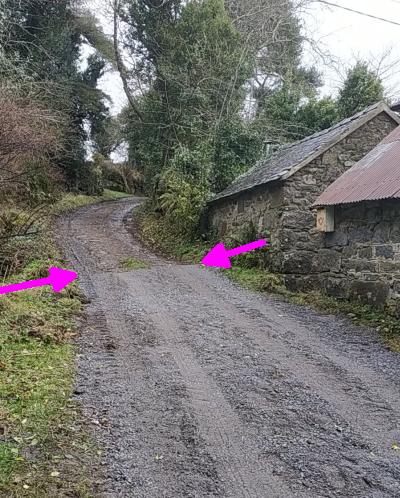 Because there had been no discussion about A Plan, there were 12 plans going on in  parallel. And nobody NOBODY would listen to me about fixing the drains before dressing the surface! But IF there isn't a big spill of rain that washes all that fixin' to buggery THEN the pilgrims may be impressed by the road surface. I await the diktat that I am to paint my front gate rather than bringing shame on the parish for that.