What a difference an L makes

I've had occasion to slag Oatly before because it is fabricated by food engineers and is mostly water . . . and increased in price by 50%! in just 4 years. I'm really sorry to feedback that the Oat Drink made by Flahavan's in Kilmacthomas Up the Déise, is thin gruel compared to Oatly; which is holding its own as original and best for the half of Chez Blob which has gone all dairy-free. 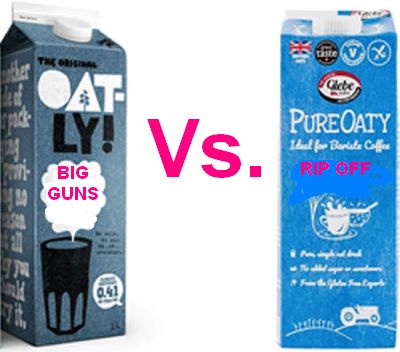 Clearly Flahavan's has not been alone in witnessing the frothy rise of Oatly huge mark-up and decided cor, we could have some of that. and jumping on the me-too gravy-train. A couple of years ago siblings Philip and Rebecca Rayner who run Glebe Farm Foods, in Cambridgeshire, England, launched their own brand PureOaty and prepared a large chest to store the money as it rolled in. Not so fast, said Oatly's fancy lawyers - you are not only coat-tailing on our great idea, you are also infringing our copyrights and trade-marks. The British courts have now found in favour of Oaty the home-grown producers and sent Team OatLy back to Sweden where they started. It doesn't work like that in tech: if the Rayner's were e-selling some product or service on the Internet, it would be absolutely expected that they'd have an exit strategy involving selling out FAANG and retiring early.

Oatly is in the news for another reason this week having aggravated the Advertising Standards Authority (ASA) in Britain. Not content with selling £50,000,000 'worth' of water-with-a-hint-of-oats, Oatly decided to grow their market with a series of ads making exaggerated and inaccurate greenwashing claims about their whitewash. tsk, it's enough to turn a bloke to milk.