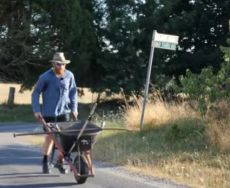 Beau Miles is an eponysterical running - vlogger - fixer from Oz. Me, I can only run if its downhill, but I'd be happy with being called a Fixer . . . because bricoleur is maybe too French pretentious? Anyhow, Beau was jogging with a pal when the latter tripped over a rock in the middle of the trail and buggered his ankle. Beau quixotically undertook to take wheel-barrow and crowbar back to the spot to remove the folk-felling obstacle . . . it's only 14 km! Go Beau!

I have some form on removing obstacles from the road. It really doesn't take much a) time b) effort. But a sort of madness overtakes most car drivers - insulating them from The Others out there struggling through life's journeys.

On a related matter, my correspondent G is moving house. They've been in their current place for nearly a decade, it was almost Hobson's choice because, even in those post-crash days, it was hard to find a place to rent that could take multigeneration family and a shouty dog and was approaching affordability and was within the city limits. But how is where you make it and it's a wrench to have to leave . . . because the Irish Constitution privileges the rights of property or the rights of people. I've been struck with the shitty end of that stick in the 00s . . . yes even Patriarchal me. Finally, probably because of the imminent eviction, G has moved to the top of the the local council housing list. I am sure there are compassionate and caring people who work in the housing office; but the system is quite unbending and capricious in its bureaucratic requirements. Nothing can be removed or added to the front garden without permission, for example.

The  back/side yard is fair game, it seems. Whatevs, I was [t]asked to start the removal of a clatter of raised "flower" beds which a previous tenant had built over the concrete slab in  the far corner of the yard. After removing the rotten remains of a rabbit hutch and a raffle of crushed flower pots and plastic sacks, I was left with a tonne of cleanish soil and pebbles which had to go somewhere else. It seemed an outrage to add this to the dumpster which is ordered for next weekend; so I took it home to our farrrm.  Even a tonne of clean soil disappears when you have 7 hectares of a patrimony. Every time we came home from the New Gaff, I filled the trunk with feed-sacks full of earth but without a clear idea of exactly where this bounty was to be dumped. 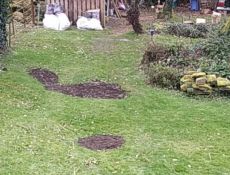 But the answer was immediately apparent on arrival. Our yard was pancake flat when we moved but that was only because the vendors had contracted John Nolan the Digger to bury the many heaps of farmyard manure, broken buckets and generalised midden. Over the following 25 years, the FYM has fermented and de-gassed, causing a buckety landscape of subsidence. It has been on my mind to scrape a couple of front-loader bucketsful of soil from a corner of one of the fields and use that to build up the cavities. Less so, now because [L] I've been able to top up the most egregious fox-holes / buffalo-wallows. Arra, I should have been a dentist!