Hang up the tool-belt

A tuthree days ago, I was regaling you with the tale of how I rummaged through my tool-bag and used a hacksaw to save a trip to the Emergency Room. That event happened in the first house we ever bought; which was silly-cheap in today's terms. It was the cheapest house we viewed which didn't have actual holes in the roof and pigeons in the attic. The Edwardian bed-brick terrace was built in 1905-6 and ran to 1600 sq.ft = 160 m2 including two attic bedrooms with antique glass-and-iron sky-lights. For £21,000 it needed a certain amount of fixing and we spent the next 4 years putting a lot of time and elbow-grease (and some money) into make the place more fit-for-purpose.

Some of the tasks were finite, and could have been tasked out to a professional with experience and the right kit. Maybe that would have been better than me spending one whole Saturday making a mortice for the new front-door lock required by the new house-insurance. it's one of those things that Joe Punter does once in a life-time but a proper chippy has internalized by doing it 100s of times. OTOH, we couldn't possibly have afforded to employ someone else to paint-strip the Edwardian architraves from the big sash-windows and door-frames. You can assume that any house-paint applied before 1950 contains lead but in the late 80s we  weren't fully aware of the dangers of torching and sanding lead paint without serious haz-mat PPE, so we just used fibre face-masks and went at it. I was a lot smarter before I took a low level heavy-metal hit from many evenings on a step-ladder picking off paint chips.

I was thinking about this after my little accident. Because we/I have resolved that when you're on The Pension you should really think about laying off chores onto younger, fitter, folk. A chore being defined as something that has to be done but ain't no fun doing. So not making bread or doing the dishes or chopping firewood - these are all quietly contemplative opportunities to still the monkey in my head. But last November we hired a man, with a power-washer, to shin up a ladder and clean the gutters; and another man with other tools to sweep the chimney; and of course Sean the Tree-surgeon. These all cost folding money but we've thus done our bit to lubricate the economy.

The thing about pensioners is that many of them are time rich, even if cash-poor. That's how four of us Olds found ourselves facilitating G's move from one house to another brighter, better-built and a very short walk to the supermarket and the nearest Polski Sklep. It's on a main road, however, and new curtains were required; so Dick and me were asked to bring drills and screw-drivers. In my time I've drilled a lot of holes in a variety of materials but I assumed that Dick, being a bit older and less wussy, would own the curtain and blind installation while I fannied about doing other work. Turns out that he found it at least as stressful and tiring as I did; but that only came out when it further transpired that he's not great with heights. 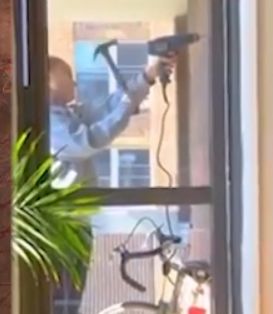 That's how I [got] volunteered to install a blind for the window at the top of the stairs. It was a serial disaster.

1) I was told that the blind was the same size as one installed earlier downstairs [it was] but I assumed that meant the window was the same width [nope]. So I drilled four holes 10cm too close to each other.

2) To get access to the side of the window that hung out over the stairwell, I found some flooring that would stretch from the windowsill to the horizontal bannister. Which is sound if the boards are fixed in place. Less so if you have to nnngggg push the drill into the wall . .  and physics dictates that the wall pushes back dragging the windowsill end of the floorboards perilously close to the edge. But not far enough to pitch me downstairs.

3) The accident happened when I stretched across the gap to step onto a chair and down to the floor. The chair went out from underneath me taking a great long bark off my shin; and I caught my head <gaDong> on the radiator going down.

4) I didn't step away but kept going to finish the task - nothing was bleeding after all and I figured if I sat down, I might fall asleep: leading to coma and death. But my four new holes were now 1cm too far apart from each other. Fakk, I'm done, I said. I could turn the whole wall into a honeycomb and still not get it right and nobody is going to be looking in through a 1st floor landing window.

Don't know about Dick, but I really should hang up my tool-belt.