My late lamented mentor Neil "NBT" Todd taught me a lot about how to live. His ethics were summarised by "your rights end where my nose begins" and I've applied that to the back of an infant's head, the uterus, the lungs, retirement etc. I was having dinner with them one night and his wife, who worked in the local police station for 40 years, mentioned that she'd been insulted [again - it went with the territory] by a member of the public. Neil suggested "Ya shudda hucked a lunger and stuck it on his nose". ie you should have spat in his face. As a USAF-brat Neil had travelled widely and picked up, distilled and adopted some colourful vernacular. It was impossible to imagine his wife Joyce, the kindest and most compassionate person you'd meet in a month of sundays, doing anything so vulgar as to follow his advice. 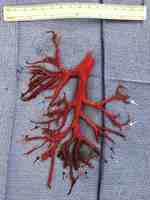 Hucking a lunger is mild compared to hucking a lung, or rather the trace-fossil of a lung. But the latter event has just happened as recorded in the NEJM. You can see a larger picture of the right bronchial tree at the link. As well as a description of the process: During an extreme bout of coughing, the patient spontaneously expectorated an intact cast of the right bronchial tree. What's also interesting is the list of fabulously expensive high-tech interventions to combat his chronic heart failure and keep this relatively young chap alive. He died a couple of weeks later, despite many additional interventions. via MeFi, where, as often, the comments are informed and often hilarious: "Fucking rad. Shared with all my nursing mates.". After Le jour des morves in October, it must nowbe International Snot Week because MeFi also has another post pointing to another nightmare worry from LiveScience: "Young Seals Keep Getting Eels Stuck Up Their Noses, and Nobody Knows Why". 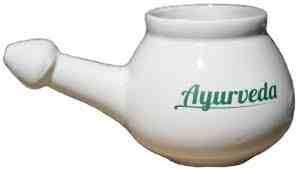 And that led me [International Snot Week after all] to an another LiveScience story about a fatal nasal abnormality. Poor Seattle woman dies from brain-eating amoeba Balamuthia mandrillaris she foolishly introduced through her nose. Her doctor recommended that his patient use a neti pot to help relieve a persistent clogged sinus. Doc neglected to emphasise (perhaps because it was obvious to all thinking people?) that the neti pot should be filled with sterile water - boiled in a kettle and cooled will probably do. Neti pot? you ask: it's a little tea-pot that some folks use to flush through their noses when reaming the nostrils out with a finger just isn't effective. You may be forgiven for thinking that "neti" is the Sanskrit for priapic phallus.  Mayo Clinic recommends clean water. In the Seattle amoeba case, the doctors were first baffled and then at a loss because such protozoan infections - "granulomatous amebic encephalitis (GAE)" in CDC-speak - are extremely rare and there are no good meds against. You won't be re-assured to hear that Naegleria fowleri is a more likely suspect for inducing GAE. CDC knows more about that boyo. Should you be worried? Naaa, not at all, there are about 3 cases a year, 97% if which are fatal, in the USA, most from swimming in warm fresh-water but 10% from using these neti pots. Here's all you need to know about brain-eating amoebic infections from LiveScience. You are far, far more likely to die driving to the swimming hole than contracting GAE from the immersion. Or more relevantly there are 1000x more deaths by drowning [bloboprev] than from amoebae. At least with drowning, onlookers can do something to prevent it, rather than wringing their hands and watching folk die.
Posted by BobTheScientist at 07:23