It is midwinter, the days are short; shorter than they'll ever be - until next December. It is the time to be hunkered down by a fire, with family and mince-pies. The chicken and ham have been ate: roasted; cold in sambos with stuffing and pickles; as pie with mushrooms and a rich velouté; as scrap-fat and lentil soup; as chicken and rice soup; all that's left is the curry . . . and early next year for rissoles. But some winter-times comfort has to be parked because there are other imperatives. The most compelling of these is to Be Present if someone close to you dies. It is an unfortunate fact that winter burials are [about 15%] more common: unfortunate because the Irish sky is <pathetic fallacy> likely to be weeping on the mourners. When The Beloved's sainted mother died at Christmas time three years ago, I was fortunate to be a lee-side pall-bearer - it meant that at least my head was dry as we stepped carefully through driving horizontal rain to the grave.

On Christmas Eve this year, the youngest brother of The Beloved's oldest friend was found dead in Galway. I always think of him as Young Rory because I last spoke to him when he was a teenager and I was in my 20s. I was full of admiration when he borrowed a canoe and paddled from Dublin to the Shannon; although that was seen by others as being on the edge of bonkers. Later and progressively he was troubled and increasingly incapacitated by mental illness. With Bressie, I've reflected a little on how poorly we accommodate those with a troubled mind: too much medication, not enough care and attention; altogether best kept off the streets and so off our consciences. Not so Rory, whose family did their best with the help of regular carers from the HSE. It's just that I feel he'd have been better catered for if he'd presented with pneumonia or cancer. Whatever, he was dead and we were on the road for a Mass at Noon in Carraroe.

The interweb said it would take 4 hours to drive from our gaff to Carraroe . . . and it did. AArouteplanner seems to factor in the bumbling old dear heading into the village for some messages and the tractor hauling a load of straw along a particularly long and winding section of the Irish road network. The only time we felt we were making time was on the 60km stretch of the Motorway between Ballinasloe and Galway City. But that was only a quarter of the total trek. There's a story about a party of German tourists who were invited to spend New Year at Clifden in the West of Ireland. They arrived in Dublin airport, hired a car and drove off through the drizzle. The further west they went, the worse the weather became: drizzle became lashing rain, the car fogged up inside and all trappings of the familiar fell away behind them. Galway in the 1970s was bleak, and beyond Galway it seemed like the End of Days. At Maam Cross, a finger post pointed into the gloom "Clifden 20 miles". It was too much, they turned round and headed back to civilisation. It was a bit like that as we crawled west through the ribbon development of houses strung out so that Bearna bleeds into An Spidéal then Indreabhán and Casla and the road rears and bucks between the rocks of the bog and the rocks of the foreshore. At least it was full day-light and the rain held off under lowering clouds.

The Mass was mostly in Irish, which is appropriate in the Gaeltacht and there were other cultural differences from how it's done in the Sunny South East. The extended family were packed in 4 or 5 pews front right, the rest of the mourners filled the church from the back; that's normal. After the mass, however, the parish formed an orderly line down the main aisle to shake hands with Rory's brothers and sisters, nieces and nephews. Meanwhile one sister and 3 nieces went to the coffin and sang Hope there's someone it was so affecting that the orderly line stopped in their tracks to listen. Quite right too. 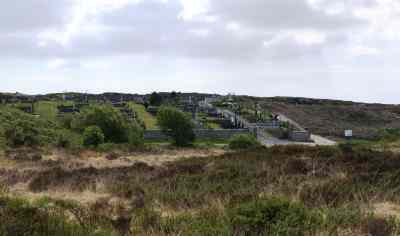 One problem with the desperate landscape of the West of Ireland is finding a pocket with enough soil to bury the dead. When the medieval graveyard of Carraroe was finally brim full 30 years ago, they prospected around until they found a bleak hillside at Clynagh on the edge of the bog to the North. Thither we repaired. It was miz in the best Irish tradition; not exactly raining but definitely not dry either. The undertaker handed out umbrellas to the family and one was thrust into my hand as the men lifted the coffin from the hearse. At the best of times, I don't believe in umbrellas [all good fun until someone gets poked in the eye] and they seem deeply inappropriate at a graveside. Rain in your face is to be celebrated while you're alive to feel it; Rory was beyond all that. At most of the funerals I have been to, the heap of soil is covered with fake-grass and after a token few handfuls are thrown into the grave with some flowers everyone moves off in search of tea and sandwiches. Not so in Carraroe: the family seized shovels and and worked at the task of filling the grave, untroubled that their best shoes were getting destr'yed altogether. Part of the need for Closure was the fact that half a dozen bags were stashed behind a head-stone filled with coral from Trá an Dóilin to cover the grave.

Years and years ago when Rory was young and so were we, The Beloved and I hitch-hiked from Dublin to the Coral Strand for the weekend. We arrived after dark and after a mighty pot of tea and some food we went down to the beach for a paddle. Well it was mystic/wonderful ! The water was awash with phosphorescence: its eerie green light trailed from my hand as it was whished through the cold water. I'd never seen such a thing before but to Rory, with hundreds of Summer days of childhood under his belt, it must have been familiar as was the crunch of coral under his bare feet as he raced from breakfast to beach to the sea. Accordingly on Saturday, for auld lang syne, after tea, much chat and some food, I wandered down to the strand and picked a small handful of coral: