♫ I mentioned a sing-song in my story of 20 hours of Eating for The Institute. Part of the traditional schedule of events at the End of Term party is a Not Everybody Has Talent 'competition'. I've been working there 6 years come New Year, so I know this happens. Seven days out, I hadn't heard anything about our contribution; so I foolishly asked our Shop Steward, who usually arranges this event "whaaaa's happenin'?". Two hours later, I was accosted by one of newer younger faculty members to find out what I had chosen to sing that year. Apparently I had been elected Weihnachtskapellmeister - unopposed, naturally - by a fourth party. I am as happy to shirk tasks as the next government salaryman, but I figured I could do worse than previous years. In 2015, we sang the utterly repellent Grandma was run over by a reindeer. Last year, someone picked a carol with a really awkward key-change,  there was no rehearsal,  and the whole perf was a shameful ragged mess. At these events you can go religious or secular; be serious or hilarious; send up the management; or not participate. What you cannot do, in my lexicon of manners, is demonstrate that you, collectively, can't be arsed: it suggests that you think the whole event is pointless and other participants are rubbish.

♫ Now I confess that I love Holst's arrangement of Christine Rosetti's aching nostalgic hymn "In the Bleak Midwinter". Just sing it straight - it don't need tremolo, descant or trills - and not tooooo slow. It's a curious mixture of evocative rural landscape and religious sentiment. I spent a while trying to trick about with the lyrics to make an ironic attack on The Suits and government education policy. But  Rosetti's poem doesn't scan in a tum ti tum ti way so you can't easily just count syllables and replace cher-u-bim with pres-i-dent. And the reason why this piece is chosen by professional choirs is because the tune is challenging. Eventually, I threw all my efforts in the bin and went back to the drawing board. 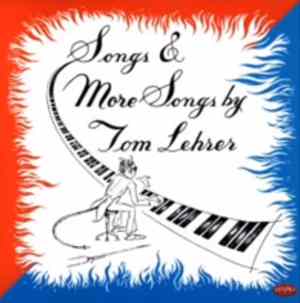 ♫ I wasn't sucking my pencil for long before I came up with Tom Lehrer's A Christmas Carol. When we were growing up in the 1960s, my Dad had a couple of dozen vinyl LPs. Two of which were of songs by Tom Lehrer. Who?never-'eard-of-'im! Tom Lehrer was a child prodigy who excelled at both Math and Music - he graduated magna cum laude from Harvard. He has been recognised, by no less than Daniel 'Potter' Radcliffe as "the funniest and cleverest man of the 20thC". Like young Daniel, we kids internalised every song on those two LPs. The advantages of choosing to sing that song last Friday were manifold:
♫ I called My People [N=59 in School of Science] to arms for a rehearsal at noon on Tuesday. Four (4) people turned up, which was twice what I was expecting. We agreed the song would work (although I was the only person in the room who had heard of Tom Lehrer) if we hived off the two difficult bits to soloists and announced a Dress Rehearsal on Friday morning just before The Event. That doubled the choir to N=8, if you count a toddler in a buggy who chewed cheerios through the whole rehearsal. The choir was doubled again when 'Science' was called up on stage. We gave it socks and it was a much more creditable perf than last year.

♫ Two sequels
♫ Prequel. I shared a family story with her because, as a Lehrer groupie, it would resonate especially. In 1969 my older brother left school and inter-railed to Greece with a school acquaintance. They abandoned each other almost as soon as they arrived. A few weeks later, more or less on his way home, The Brother was sitting on a park bench in Rome, more or less skint. He was, quite unexpectedly, hailed from across the street by an English chap whom he knew but slightly. The chap said that he was on his way to a party and why didn't The Brother come along? The happening was in a slightly run-down Roman Palazzo and who should be installed at the piano but . . . Tom Lehrer.  As I've said before, in my family [and yours, dear reader] you make your own luck.
Posted by BobTheScientist at 07:25