Damme, it used to be simple. You'd have a limit budget with which you had to feed the family, so you bought a large sack of spuds because they were cheap and filling; and then you eked out the rest of your food budget on a tin of beans or a packet of sausages to act as condiment to calories as recommended by Thomas Jefferson. The Market should work so that the commodities that were most valuable would have the highest price because demand would ensure that. Then came 'organic' and you were made to feel like a heel if didn't pay extra for something so labelled.

We had just about nailed this other dimension to food economics - there wasn't a particularly clear relationship between price and organichood. - when my sister came to visit and told us we should worry about the air-miles . . . as well as the O-word. That started us looking at the country of origin and refusing to eat new potatoes in the early Summer because they all came from Cyprus or Egypt. As I say, it all got too much for my little brain and I went back to price. If regular milk is 75c and organic milk is 100c, and it is, then I save the 25c towards giving myself a clock when I retire. And the hell with thin milk, fat-free milk, and other adulterated products where you pay the same price and don't get all the ingredients. And I certainly don't buy other white beverages made with seaweed, palm oil, emulsifiers, and soy | almond | rice | oat. I tell ya there's a killing to be made with Genuine Irish Potato Milk.

Now The Beloved has pointed me at yet another dimension of food-guilt. As well as the organic, fair-trade, forest-friendly, kosher, nut-less, milk-less, gluten-free; we now have to get all WIGged out over the Warming, Index of Global. It hasn't yet appeared on the labelling but the BBC has a helpful starter pack to see just how your self-indulgence over pork, coffee, wine is quietly destroying the planet. According to this BBC app, I should be putting almond 'milk' in my porridge: 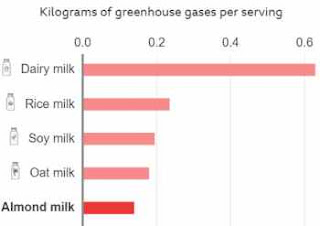 . . . but it ain't gonna happen. You can jump out of the global warming frying pan and find yourself plunged in a toxic maelstrom of carcinogens from these made-in-lab commodities. I'd rather skip the white stuff altogether and have my porridge protestant plain.