I'm not a person for whom Sunday [or any day] Lie-In has much appeal. Maybe there was a time when we'd spend the morning in bed surrounded by croissant crumbs and sections of the Sunday newspapers. But if those days existed in reality it was at a time when we lived in a city flat and had nothing to do but go to work, sleep and eat. Nowadays I have a protestant tendency to spring out of bed when I wake because things need a-doing. Occasionally I'll get caught by this reflex reaction and one of those was the Saturday before Christmas.

It was a weekend in holiday time, so as I fell into bed at Midnight I didn't set the alarm clock. When I woke it looked like it was dawn outside, so I flung out of bed and rushed downstairs, picking up a bowl of sourdough dough from the hot-press on the way past. I had transferred this living ferment to the tin and was half way through a cup of tea when I noticed it was 0510hrs. Dang! The 'dawn' was the last curtain-blasting rays of the setting full moon. As it happens, Dau.II was up at about the same time girding her loins for work at Cork's English Market; and she has a camera: 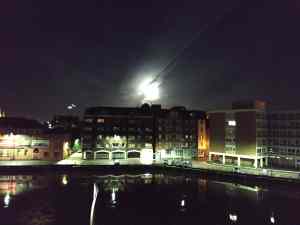 As I was up, I made a batch of sweet yeast bread to whc I added cherries, marzipan and almond slivers. I thought that was suitably medieve-yule for the season. But it meant that Saturday was a long time between sleeps.

The whole adventure reminded me of one night when I was walking back towards France along the Camino de Santiago. Peregrinos as a rule are absurdly early-risers. The whole train is driven by anxiety about securing a first-come-first-served bed after the day's walk. Dormitories typically start the wake-the-dead sussurrus of plastic bags being stuffed into rucksacks well before sun-up. That night I collapzzzzzzzzed on my bunk after a feed of pasta. I awoke  refreshed and energised; downed a cup of coffee [because Spain does not believe in tea] and started to get my kit together. I noticed a red glow in the sky through the door-way of the refugio against which were two men smoking. I went up to ask ¿Qué hora es? but I couldn't understand the answer "e diez y media" because it was incomprehensible to me. I had been asleep for only two hours; and half past ten at night was no time to start the day's trek.  The glow was the last shreds of sunset.
Posted by BobTheScientist at 07:15