I was trying to explain the SI Units three years ago: how science has defined 7 fundamentals which can be measured.  If you can measure / define the following: 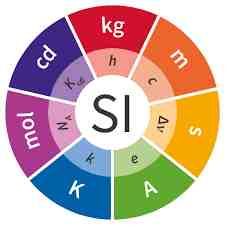 then everything else falls into place. The key equality for electric circuits Volts x Amps = Watts [prev] appears to have only the current defined. But electric potential
Volts is measured in V =  ‎kg·m2·s-3·A-1 while power
Watts are measured as W = kg·m2·s-3
You should be able to see how similar W and V are. If you divide one by the other you get A = ampere or Amps = Watts/Volts. If you define Amps, metres and seconds [see SI table above] then you can calculate Volts and Watts.

SI units were created in the ferment of the French Revolution which wanted to cast loose from historical units such as 1 yard = the distance between the nose and the outstretched thumb of Henry III.  Which is pragmatic but inconvenient if the said Henry loses his arm in battle, develops osteoporosis or dies. In pre-revolutionary France there were hundreds of weights and measures: local, variable and hard to compare accurately. Can you even put these in order of size?:
Barleycorn; Chain; Cubit, Ell; Fathom; Foot; Furlong; Hand; Inch; Mile; Rod-Pole-or-Perch; Yard
. . . and that's just the English measures. In Nederland, as in England, 1 voet = 12 duim but their foot was slightly shorter than the English one. Those amazing revolutionaries wanted to have a universal, and universally agreed, system of measures preferably based on physically unchanging aspects of the natural world. The meter was defined in 1793 as one 10millionth of the distance from the pole to the equator through the meridian of Paris. The gram was defined as a cubic centimeter of water at a particular temperature and pressure. Not very convenient if there's a legal dispute about the length of two meters.  Before the century was out, the metre was redefined as a particular metre kept at constant temperature in a room in Sèvres near Paris. Likewise a cylinder of precious metal was defined as The Kilogram.

For most normal purposes that would serve everybody: every so often The Kilo could be reverently removed from its case, given a little polish and weighed against a crop of Practical Kilos that could be distributed round the country and serve as the local standard. Local regulations ensured that butchers and cheesemongers had scales that adhered ultimately to The Kilo in Sèvres. Polished? Whoa, lads! BIG problem if you're weighing things with great precision - in chemistry or atomic physics, say. You could polish off uncountable numbers of atoms or conversely rub in a minute gobbet of spittal and The Kilo is off by a wholly uncertain amount. That has caused a great deal of anxiety among metricians / metrologists ever since.

It is therefore good news that The Kilo in Sèvres has been pensioned off and replaced with a new definition based on universally agreed constants like the Ampere. What they've decided is to use a Kibble balance, invented by Bryan Kibble the pioneering British metrologist, it is also known as a Watt balance because the instrument measures the precise Amps and Volts [= Watts as above] in an electromagnet that will exactly counteract the pull of gravity on the other end of the scale. This sounds super-complicated, and it is, because precision is required. But the same principle is at large in a spring balance [as L] in which you mobilise Hooke's law to weigh your holiday suitcase. A suitably calibrated rubber-band would do as well.

The balance solution is handy because you can then go one step further and define the kg in terms of the Planck constant 6.626 x 10-34 J.s. That's a minute amount of energy applicable to the ooomph of a single photon. In physicsland (where I am not particularly happy), energy (measured in Joules J) is different from power (measured in Watts) but the two are directly related 1W = 1J/s. Obviously the new kilogram defined in Watts requires a helluva lot more energy to keep it from falling than a single photon. The physicists have their work cut out for the next several years to measure everything with more and more precision to ensure than any kilo is the kilo; you just need a Kibble balance and a steady hand. The measurererers are also coming at it from another direction: defining the kg in terms of a mole - another SI unit for counting molecules. 1 mole is the number of atoms in 12g of pure carbon; and firmly believed therefore to contain 6.022 x 1023 molecules. If we could count the molecules in a particular cylinder of platinum and iridium in Sèvres then that would a metric transferable to anywhere in the Universe.
Posted by BobTheScientist at 07:38