. . . have a couple. At The Institute, I continue to teach a few hours a week of Introductory Biology which is not without its rewards. Because my current Intro Biol lab section is populated by Sporty People, it is appropriate to investigate the structure and function of the heart which pumps oxygen and glucose to all their pumping muscles. A few weeks before the day, our trusty technician talks to the butcher in his home-town and orders 4 dozen sheep's hearts - pig's will do: we're not fussy. Mouse hearts are too fiddly and beef heart is too big. And a sheep's heart is about the same size as ours which helps on reality checking.

Nobody in Ireland under the age of fifty eats heart, or liver or kidneys; let alone brain, pancreas or tripe. If meat is eaten at all, it comes in neat chunks in a polystyrene tray covered with cling-film. That way nobody has to reflect on the living creature that last week was out in a field eating grass. And today's butchers do much less butchery than their fathers did: the slaughter and dismemberment is mostly carried on in factories far away by lads from Eastern Europe. On these brutal killing and processing floors, there is little time for nicety because the lads get paid by the piece and time is money.  The standard protocol is to slash through the chambers of the heart so that the black clot of blood left after slaughter can fall to the floor and not disturb the few remaining people who buy these things to eat. That makes it rather difficult for our students to dissect their heart - they first have to piece it together again. 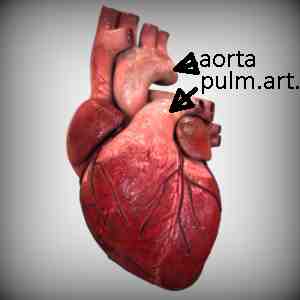 The interesting things about the anatomy and development of the heart is that all the plumbing is at the top and as the heart makes a 180o turn, so the major blood-vessels are naturally tangled around each other. To orientate the heart I recommend that it is picked up and a finger is thrust into the aorta and palpated on the wall of the ventricle: that way your know you're in the Left ventricle. If you do the same thing with the Pulmonary artery and you should finish up in the Right ventricle. It is optional to make a light-hearted reference to the similar palpations carried by a proctologist. Last week, as I demonstrated this with some élan, I failed to notice the stream of bloody fluid that was making a puddle on the floor and on my shoes. The students, eyes on stalks, were unable to warn me to hold the leaking vessel further away from my mid-line. A little later, my glasses fell off my face as I peered into the mess of offal on one student's dissecting board. That time, one of the other students kindly pointed out that I had a gobbet of tissue in the top corner of the left lens: "You don't want to get that in your hair" was how he put it. I think we all learned something about how the ticker ticks.

At the end of the practical, one of the lads looked at the handful of chopped meat on the ratty old dissection board and asked if it was okay if he took it home. It was polite to ask but also put me in a quandary. I really didn't think it was appropriate to use the heart as a jape to shock his flatmates by dropping it in the toilet bowl. But it transpired that he intended to emulate the folks of my generation and cook it. I could do better for him than that and nipped back to my office to get the zip-lock cheese packet which I use for my lunch-box. Emptied of sandwich, this packet neatly took the remaining two unbutchered hearts which I presented them to him to take home. I'm sure Health & Safety would have a huge fit of the vapours over this but I don't think anyone will suffer any adverse effects.
Posted by BobTheScientist at 07:15