Science Week, the annual nationwide raree show promoting science for the people, to the people by the people, is coming up: 12th-19th November. As Secretary of the Wexford Science Café, I was asked to send out brochures and information to our mailing-list, which is clearly more interested in Science than 40 random people in the Lidl check-out line. Many of the events are going to take place in County Libraries and so I became aware of a talk 12km from home: Preserving Prehistoric Rock Art! This is our sort of talk because we are Guardians of the Ringstone. When we unearthed the bits of the Ringstone 10 years ago and reassembled it 7 years ago, we were concerned about its security.  Not that some goon would come with a digger and take it off site to sell as an antiquity to an Antique Oil Sheik. But what about exposure to the sun, wind, acid rain, blundering sheep? Would the changes we made result in the rings becoming less crisp? 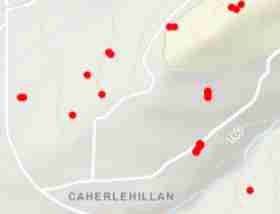 The presenter in Bunclody Library last Thursday was Claire Busher O'Sullivan, a recent Masters' graduate from Archaeology UCC. She has spent a couple of years out in the field in remotest Kerry and Cork looking obliquely [to catch the cast shadows of fain indentations] at the local sandstone rocks. Some parts of those counties, like Caherlehillan [map L], are like a Hallowe'en brack with all the red dots By being tuned into the look-and-feel gestalt of  rock-art she has discovered and documented 40 (forty!) previously unknown archaeological sites. That is an amazing achievement for a young student. Either that or it is a cinch to turn up these things and we are seriously under-reporting the prevalence of neolithic art-work across the country. One of the partly articulated hypotheses is that rock-art is more likely to be found in particular landscapes: with exposed boulders for starters! But also in upland valleys associated with lakes or streams. Maybe if we desire to find new sources of the stuff we could spent some time poring over maps in the office to identify other landscape features similar to places where there have been "hits". Another interesting suggestion from the floor was to ask if there is a memory of these ancient [sacred?] sites to be found in a careful analysis of the local place-names. 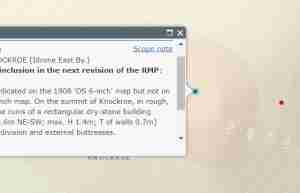 Finding more rock art is not always greeted with capers of joy and hats flung in the air. We grassed ourselves up to Chris Corlett [who wrote the book!] and the National Monuments Service, the Ringstone became a dot on their interactive map [R] and we scotched any possibility of selling sites for bungalows in either of the two fields abutting the site of the Ringstone. A meadow of, say, 0.2 hectares is 'worth'  €5,000; but as a site with planning permission its value increases to €50,000. You can see why a farrrmer might decide to bury or bust up an archaeological artifact found in the corner of a field. Neolithic art butters no parsnips! That's another reason why the inventory of National Monuments is probably thinner than it might be. My suggestion from the floor was to ask the government to give me €100-a-year for being the Guardian of the Ringstone. That modest carrot might have more effect on the discovery and preservation of ancient rock-art than a raft of threatening legislation which is never implemented.

Two years ago, Claire curated and created an exhibition of rock art in a gallery space in Cork. She's an enthusiast, but a focused one, who is going places in Ireland of the Antients.
Posted by BobTheScientist at 07:52