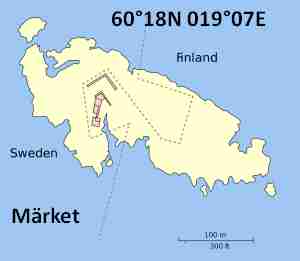 Let's start in the chilly Baltic with Märket a skerry - a small low-lying island - the most Westerly of the Åland Islands located between Finland and Sweden. 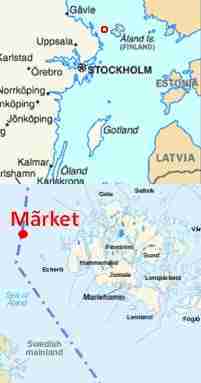 I mentioned recently that 5% of Finns speak Swedish as their first language and that the density of Swedophones is highest in the SW of the country, and stronger still in the Åland archipelago, which was in its day a great centre of maritime trade. Many of the last of the tall ships were registered in Mariehamn / Maarianhamina the capital of the territory. They speak Swedish there because the islands, and indeed most of what is now Finland were part of the Swedish empire up until 1809. In that year, the Treaty of Fredrikshamn between Sweden and Tsarist Russia ceded Swedish Finland to Russia. That treaty concluded 18 months of hostilities which were a Northern sideshow to the continental conflagration which we call the Napoleonic Wars. The border between the two empires was set as a line midway between the Swedish mainland and the substantive chunks of  Ålandia. Surveying at sea is difficult, so the line was anchored by being made to pass through the middle of Märket a low lying rock in mid-channel about 3 hectares in area.

Whatever about the political border, being in mid-channel made Märket a major hazard to shipping with ships piling up against the rock whenever visibility was compromised - dark, fog, sleet-storms all being endemic at the end of the Gulf of Bothnia. In 1885, the  government of Alexander III wearing his Grand Duke of Finland [Великое княжество Финляндское / Suomen suuriruhtinaskunta / Storfurstendömet Finland] hat authorised the construction of a lighthouse complex on the highest part of the island, and it was so. Everyone was grateful, especially the families of mariners who were not drowned on the foreshore in a storm.  Finland achieved its independence in 1917 but declined to cede the Åland Islands to Sweden despite a plebiscite of 95% calling for re-integration with The Old Country. Eventually the islanders settled down as an autonomous region of Finland and peace reigned . . . until someone noticed that the Finnish lighthouse on Märket was on the Swedish side of the border!

The two parties set up a boundary commission and in 1985, to celebrate the 100th anniversary of the opening of the lighthouse, the border was cleverly and pedantically adjusted [see map at top] so that, a) the old border hit the shore line at exactly the same point (so that established fishing zones were retained) but that b) Finland ceded an area East of the lighthouse buildings to compensate precisely for the territory lost Finland by its buildings. Considering that the exchanged areas are each about the size of our haggard [= farmyard from Old Norse heygarthr: hey hay + garthr yard] the solution probably cost something North of $10 / sq.m. Finland and Sweden [and Austria] joined the EU in 1995, which doesn't mean they aren't potentially in dispute over fishing.

A bit more quirky detail and a rather good slide show of developments from Irish blogger Diarmuid O'Daft. Political posturing over a lighthouse? We've met that before in the Far East.