Pushing the boat out 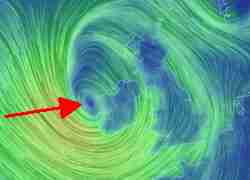 We got the power back after Ophelia in time to make a hot-water bottle for bed on Wednesday after 56 hrs of darkness at night and washing in a bucket. Pals of ours on the Wexford coast were still powerless yesterday (Friday) evening which means they have missed the boat and will be bumped down the list by at least 48 hours. Why? Because Storm Brian is in the process of stomping through Ireland for a shortcut [see whippy winds, especially at sea R]. The electricians will work though rain-storms but draw the line at being on top of a cherry-picker in 100km/h winds. The prequel to Brian was a wall of precipitation that took 6 hours to travel across the island W to E. That's about right because The Weather travels at about 60km/h regardless of the speed of the component circulating wind. aNNyway, we had been looking forward to the launch of m'pal Russ's book about The Fishin' in Waterford Harbour. We set off as night fell and the rain was still hosing down; we had to cruise through a deep road-wide puddle before we reached the first bridge at the county borrrder and another before we reached the first village on our journey; so we bottled out and went home. Launching a book is one thing; to launch the car is another. Hardier, localler folk turned out in sufficient numbers so the Book Launch wasn't a total wash-out. In my Ophelia aftermath report, I mentioned the far more serious consequences of Hurricane Maria in Puerto Rico.

It turns out that one of the smartest members of my scientific Set has done good for herself and has joined the diaspora to work in Harvard Medical School. She posted a message to the bioinformatics listserv list to tell us-back-home about Harvard's response to Puerto Rico's woes. I complimented her and her co-workers for doing something rather than closing the emotional shutters in the face of a tsunami of disturbing thoughts and pictures.  Her e-mail included a
List of Urgently Requested Supplies;
Solar panel charger for USBs; Phone battery chargers with USB and a wall charger; Inverter power units for cars; Portable water filter bag; Feminine hygiene products; Mosquito repellent; Sunblock; Sleeping bag; Baby wipes; AM/FM radio that can be recharged with USB port; Hand sanitizer; First aid kit; Plastic gloves; Disinfecting wipes; Flashlight or lamp (preferably solar or charged with USB); D batteries; AA batteries; Hat to protect from sun; Matches; Toilet paper.
If you have a drop of kindness left for the inhabitants of a distant sub-tropical land, you'll want to do something. Your far more likely to actually respond if the path-of-giving is clear. Since before my parents got married in 1950, happy couples have wanted to avoid getting 12 toast-racks and no bath-towels as wedding gifts. The solution has been setting up a wedding list service at the local department store to allow wedding-guests choice while ensuring that the happy couple get a useful cross-section of what they need to start a home together. Amazon has tapped into the well of well-wishing and will provide a similar service for other events: here's the Harvard list of essential supplies for Puerto Rico, you can buy (among a lot of other required kit)


The fraction indicates the number of each product still required, the % is its reciprocal: the percentage of that requirement which has been fulfilled. Oooo, data! The project was only launched last night, so the giving is ongoing, but it's interesting what the first responders consider to be the most important items to ship out foreign. The item most seen-to-be essential is a box of rubber-gloves [76% fulfilled]; that might be because they are cheap or for more complex psychological reasons. I know that the charity sector [in Ireland at least] has suffered significant reputational damage in recent years [fraud, featherbedding, 4x4s]. The Irish response to this Irish problem is to set up a new supervisory quango under a well-paid CEO! But really wouldn't it be more efficient to give $7.69 to Oxfam / Goal / Trocaire and let their experts decide the optimum way to spend the money in San Juan? Heck, Oxfam would be able to negotiate bulk discounts from wholesalers rather than paying retail to Amazon. 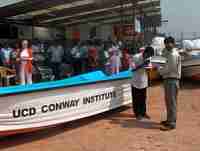 Remember the Sumatran Tsunami of Christmas 2004? I was working in UCD at the time and so was Dr Chandralal Hewage.  Indeed, that community was so small that we were co-authors on a paper.  Chandralal originally hailed from Sri Lanka and, in the aftermath of the tsunami's destruction of the fishing industry, set up  a fund to buy a replacement fishing boat for any surviving fisher-folk to use. Because we knew Chandralal, the project was massively oversubscribed and within the next year fifteen 15! boats were built with the UCD logo [L at launch]. If the same thing happened today, they'd be more imaginative about the names of the boats.

Note: today its a twofer: check piece immed below?
Posted by BobTheScientist at 08:54