Each year I have one or two sections of 2nd Year QM: that's Quantitative Methods. Except that it's not any more because the powers-that-be have decided that QM is not what we teach here and so renamed the course Research Methods aka ResMet 2. Call it what you like, the course is essentially the same. In 2nd year we assume that the kids are now reasonably numerate and are now fit and ready to get some training in statistics.  One of the deliverables is "familiarity with statistical terms and definitions" and a couple of years ago I invented a nifty way to make sure that everyone knew the difference between a "double-blind experiment" and "the placebo effect". Same again this year: it makes a change from dragging data-sets backwards through the hedge of SPSS or Excel.

This year I noticed that the definitions coined by the students which appeared to have least explanatory power were rather short. Whereas the longer, more qualified definitions which were clear as daylight. Here's some data. Never have enough data. I plotted the success of the various student-generation definitions against their word-count, thus: 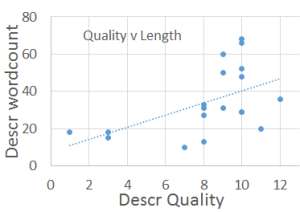 It's not a super-tight relationship, but the three very short definitions on the left of the scatter were opaque of meaning to other students. When brought this up in class, there were respectful jeers from all sides: "that Bob, he'd analyse the chick-peas in a vegetable curry if someone would count 'em for him".

But I think there is a general minimax concept at foot here for our communications. You have an idea to get across, you know that ambiguity won't help anyone, so it is worth devoting some time to a longer explanation. But you don't want to go all Lawyer over it and generate 15 pages of  small print, qualifications and get-out clauses to tell the waitron how you like your steak.  Less is not always more; but a Goldiloxian just-enough is what we should strive for.
Posted by BobTheScientist at 07:28