My father was born in London on 10th of October 1917. That was exactly 100 years ago today. I'd like to get a glass of champagne into his hand to recognise the full century but I can't do that a) because he died in January 2001 at the age of 83 a few months after we celebrated the parents' 50th wedding anniversary and b) with the cremation and all there is no hand. I wrote last July about how his restless and questing acquisition of knowledge finished him off in the end. If he hadn't felt the need to read all the Sunday papers, he might have had a free hand to steady himself on the way up to bed. With his hands full of newsprint he fell back down the stairs with more noise and commotion than he'd intended on his way upstairs. His children were assured that he was doing alright and that a full recovery was expected but five days later he was dead. So none of us got to say good bye. In Britain they are famously inefficient and drawn out over funeral arrangements and it was a full ten days before the Old Man had his final trip to a crematorium.

When I finally got back to work I had an insightful conversation with my boss about [not] saying goodbye to parents. His position was that, if I had failed to have The Conversation with my father, it was because at the time it didn't seem appropriate, so there was no point in beating myself up when the door clanged firmly shut on ever having that Conversation. I thought that was wise, or at least that it provided a ha'porth of solace. I miss him occasionally: usually when I dig up a nugget of information about the sea or maritime history; or when his grandchildren achieve something nifty.

A couple of days ago, I reminded my brother and sister that today was Der Hundertjahrfeier because its hard to know where to send the birthday card and I didn't want to let the day slip by entirely unacknowledged. I wrote last January about him being a stickler for time keeping; how he was late for his own funeral; and how the irony of such a final comment on a life-time's cultivated habit would have tickled his sense of humour. Sunday lunch was not only at 1 o'clock +/- 2 minutes, it had a comforting predictability: a joint or a chicken, vegetables, gravy and roast potatoes followed by pud. He would volunteer to wash the dishes but that meant that we three children had to facilitate the process: one to clear the table,  one to dry the dishes and one to put them back in their cupboards. He was willing enough for the chore but casually terrible as a plongeur! If something appeared on the draining rack that was really unacceptable, the drier would pass the offending article behind the Old Man's back to the table-clearer for another go through the suds. At Christmas there would be a huge to-do in one corner of the kitchen as he made bread-sauce <glarrk>. Nobody else in the family would eat the stuff, but it was an immutable tradition. The other food-error that he was never allowed to live down was when he was once tasked to make breakfast on a family holiday, but burned the toast, used lard instead of butter and tried to disguise the shambles with a thick layer of marmalade.

The Skipper grew up in and around boats in Dunmore East where his father was harbourmaster. He was interested in maritime history because he was a career naval officer through the war and afterwards at home and abroad. 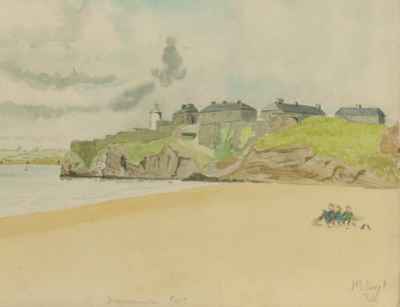 He could paint [above - on the beach at Duncannon with sweaters: when shall we three freeze again?], leaving behind a huge collection of water-colours. He could also play the piano nicely but did so rarely; he preferred it if music from an extensive collection of classical vinyl was roaring through the house - no head-phones till much later. But the records that got worn out weren't Bach or Brahms but Tom Lehrer poisoning pigeons in the park Ottilie [Patterson]'s Irish Night The Ould Lammas Fair and Peter Sellers taking the piss out of Ottilie's jollitie. I dunno, I guess you had to be there and we were, we were. I will finish with a limerick, a verse form of which the Skipper was fond . . . but one which breaks the rules, another thing he felt able to do:

There was an old man from St Bees
Who was horribly stung by a wasp
When asked did it hurt
He replied: quite a lot
But I'm jolly glad it wasn't a hornet.