In the footsteps of ancestors 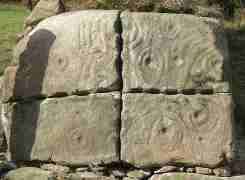 As Guardian of the Ringstone [R] I have a duty of care towards the neolithic artwork which we discovered on our property ten years ago. In 2010, after we had recovered all four chunks of the worked face of the rock, we roughly assembled the jigsaw and went for lunch. Over the celebratory meal we talked about what to do with our find. As one of our party was/is an The Man from the State Archaeology Service, there were fewer possibilities available to us (selling it to a passing American, for example). But three sensible options were entertained and each deemed okay by The Man:
Several people separately suggested that security should be part of our decision making process. There is a cohort of perps who travel round rural Ireland half-inching compressors, chain-saws and ride-on lawn-mowers from barns and out-houses while the legitimate owners are at the mart or at a funeral. I dismissed the idea that someone would come round and take 4 half-tonne lumps of rock to sell at a local car-boot sale. It's just too awkward a proposition; and who would want to buy such a thing?

Then two items popped up on the blogosphere. The first was a fascinating story of a long-distance furniture mover. One of the anecdotes told is that a certain rich fuck celebrity had acquired eight Qing dynasty tombstones and was having them schlepped across the USA. Maybe I should call Aspen Co long-distance and see what price I can get for neolithic Irish original artwork.

The second story by Babis Fassoulas was about the looting of a set of 6 mya footprints from Crete [R]. The really annoying thing about this archaeological vandalism is that much of the value of antient artifacts is their provenance and location. The laws of stratigraphy apply, for example: things under others are usually older. A shoe-buckle or a coin is much more informative if its depth and context is recorded as well as just the site. And a displaced object has lost much of its utility. A paleolithic Venus, for example, is fatuous as well as fat if it finishes up unattributed on a penthouse mantle-piece in Manhattan or Saint Germain-des-Prés.

Then again, then again, Fassoulas points out that leaving sites open to the weather is one way of exposing more layers of our shared history. Mary "Ichthyosaur" Anning went out along the beach from Lyme Regis after storms in the hope that another slab of cliff-face had fallen to reveal fresh bone-scapes. When a softer layer of Cretan mudstone erodes, fresh tracks appear on the landscape as glistening puddles heading into an ancient future.
Posted by BobTheScientist at 06:31