Ophelia: there's rue for you

We were all hyped-up for Ophelia. It's just wonderful that, with Met Eireann and a network of weather satellites, we can see The Big Winds coming in orderly one after the other from the Atlantic. Ophelia was a little peculiar in that she didn't visit Disneyland on her way to Europe but headed straight NNE after being born near the Azores. It could only do that, gathering power as it went, if the water was warm enough to hype her up; and it was this year. Maybe in future years this will be one consequence of global warming. I've had a little to say, mostly wrong, about oceanic water temperature and its effects on weather in Ireland.

ANNyway we spent last Sunday reefing the tops'ls, battening down hatches, putting a concrete block on the wheel-barrow. We also made sure the Good Ship Powerless had sufficient water i n containers because without electricity the water stays in the borehole. Not much we can do about our 17 x 9m poly-tunnel [pic etc.]. If it decides to take off, and it's bigger than the Cutty Sark's mainsail, it's gone into the next county. When the storm was fizziest, I went out to see what went down in between showers of horizontal drizzle and noticed that the edge of one of the corrugated iron shed-roofs was lifting and rattling a little too rhythmically for comfort. Power had failed us by then so I couldn't drill a hole in the corner and tie it down. But, with PhD smarts, I attached a C-clamp and tied that off on something solid. Not before some of the roof-nails had been worked out by 3 cm, though. Whatever about a mainsail's worth of plastic from the tunnel, nobody wants to see sheets of corrugated iron taking off . . . or indeed coming in to land again. 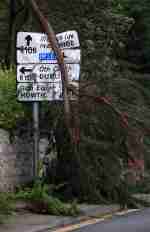 Ophelia tracked up the West coast bringing down trees and whisking away the roof of a community school in Douglas, Co Cork. The Education Minister closed all schools and colleges on the Monday and most bus & train services were shut down in anticipation. In the end, it wasn't as bad as it might have been. 3 dead, 360,000 without power, 50,000 without water. Both those including us for the last 46 hours. Living remote, we are the last people to get power restored: those darned sewage treatment plants, hospitals and old folks homes getting priority. It's fun (for a while) cooking on a wood-stove and washing in a bucket. The Beloved is going to do triage on the freezer today. A lot of our neighbours are going to get lamb-chops, if they are getting soggy, even if they are vegetarians. I was comparing notes with one of my colleagues at work who lives in Athlone. He reported the most exciting news as the car (empty) of a neighbour of a friend of his cousin had been flattened by a tree. Then he mentioned another neighbour who works for a multinational which has offices in Puerto Rico. 200 employees of the Puerto Rice branch are unaccounted for after Maria. One flat Nissan Micra is a bit of a First World Problem.

When I went to work on Tuesday, I packed a fuelled-up new-sharpened chain-saw in the boot of the car along with the PPE clobber: hard-hat and visor, chaps, boots, gloves, ear-defenders. But the damage (maybe 12 biggish trees down over 40km of back-roads) had all been tidied away with just leaves left on the road. Those farrrmers, nothing they like better than getting out in the dark with a 4x4 for headlights and a chain-saw for macho. For us, apart from deadwood branches and twigs, a big ash tree Fraxinus excelsior fell out of the ditch and I've been doing manly things after work with the chain-saw gathering Winter fuuuuuuelll.

OPHELIA: There's fennel for you, and columbines: there's rue
for you; and here's some for me: we may call it
herb-grace o' Sundays: O you must wear your rue with
a difference.

Hamlet by Wm Shagsper
All in all we didn't rue Ophelia too much because she didn't get get real mad and make us over-much sorry from her passing through. The Hardy Boys and Girls from the ESB, have been putting in 16 hour days restringing electricity cables and got to us last night after 2100hrs and the power came on again. Two and a bit days without power is okay if you have a car and a job to go to, the use of your legs, and are reasonably continent in the toilet department. Failing any of those and it would be tedious. The contrast between my getting up this morning and the deliberate schedule (lighting the fire in the dark for hot water for starters) of the previous two days put our carelessness about the benefits of modern convenience into perspective. I heard a story on the wireless a few days ago about the bliss of a farming lady being brought a cup of hot tea in bed by her daughter after the Shannon Scheme came through with rural electrification in the 1950s. Before that, it was too much trouble because the cows needed to be brought in for milking before the fire could be laid to heat the kettle.
Posted by BobTheScientist at 07:05