In my time at the digital coal-face, I've learned how to program computers in Basic, PL/1, Fortran, Cobol, Pascal, C and Perl. I've done this in all possible ways: by the book, in formal courses, on my own or embedded in a lab. The best way has always been to a) have a project that needed to be completed b) access to i) time ii) a computer iii) a colleague. The colleague didn't have to be better at the task or a mentor; better be the source of half an idea towards the solution to intermediate problems or a willing ear. Book learning is a useful asset, but lectures are more or less a waste of time. Just DO it!

When I started work at The Institute it was about 5 years since the bottom fell out of the construction industry in Ireland. The undergraduate years were leavened with a really interesting cohort of grown-ups who had missed out on college because they were technically competent and a good pair of hands and had been sucked into the celtic tiger tornado more or less straight form school. They were great to deal with because they brought something to the table at lectures and had a very direct idea of why they were embracing 4 years of poverty in college. I caught up with one of these blokes last week when I saw him having a late lunch in the coffee dock. Turns out that he was back in college for a few days to run some samples through the HPLC; because they needed to be processed but also because he needed to be able to add "can drive an HPLC" to his CV.  He could do this because he is currently between jobs, which a cause of some anxiety, but he wasn't going to fret at home if he could be twirling the dials in the lab.

I suggested that, while getting down and dirty with the instrument was sensible if it didn't cost too much, it would be silly to go an an HPLC Course; if such a thing was on offer. All technical instruments are different; heck, each brand of HPLC is different, but they are designed to be used, if not by idiots, at least by technophiles. I reckoned that a couple of days would be enough to be able to blag "HPLC Effective" onto his CV. What he couldn't work out when he was hired by Chemicals Inc., he could ask about, or read the S.O.P. . . . or even peruse the manual.

That all reminded me of a family legend about G [prev] when she was young before she became a wife-and-mother she took herself off to London to seek her fortune. This was in the 80s and there was bugger-all in he way of work in Ireland. She decided, after some earlier experience working in a factory in Germany, that office work was easier on the back and paid better too. So she presented herself for interview at some financial institution as a secretary, typist and all round effective. 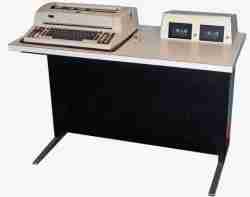 "Are you familiar with the Wang?" asked the office manager
"Of course" replied G
"Can you start Monday?"
"Of course"
So she started the next Monday and her desk was a Wang 1200 console. She leaned across confidentially to her neighbour and asked "How does this yoke work?". By lunchtime she had made a friend and made enough inroads into 1980s word-processing so that she didn't let the side down. Technical things, if they are designed properly, are easy to use. If they are not so designed, they don't clutter up the market for very long. I'm sure that,, at the time, secretarial schools were willing to take folding money from you to teach you "How to WP with the Wang 1200". All the pupils would have found it excruciatingly patronising and slow. Those being funded by their employers would be happy enough to have a week off real work. Those paying their own nickel would less happy about the time-wasting but hoping that the course qual would get them work.
Posted by BobTheScientist at 07:11