Years ago when the kids were small and it was too drizzly to work outside, I needed a pen but could not find one in the usual places. There were plenty of pen-adjacent objects in cups on the kitchen window-sill and in both top drawers of The Beloved's desk:

Eventually I gave up looking for a working pen and settled down to process the data. I counted between 800 and 900 "writing implements" in a single small house in rural Ireland to over-service the needs of a 4 person nuclear family. I talked about this to anyone who'd listen for the next tuthree years because it seemed a telling metaphor of haves vs have-nots in this grossly unequal world. Every birthday or christmas someone was likely to give the kids another set of felt tips . . . because I know they like drawing.

At about the same time I looked at the dustbin full of Lego and wondered how two small girls had accumulated so much. In my day, as a 1st generation Lego child, I had a biscuit tin of red and white bricks from which, with much compromise and ingenuity, I could construct something that resembled a house. It was March, I was 'resting', so I pulled out all the yellow-headed mini-figs after the kids were in bed and set them up on the living room windowsill as a St Patrick's Day parade: 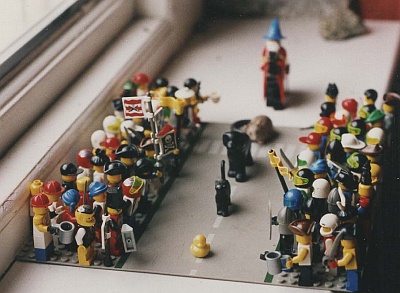 Exciting as the StPs parade is in Graiguenamanagh, with two MF35 tractors and the lorry from the creamery, ours was the only parade in Ireland that year which featured a yellow duck, a cat, a horse-sized dog, a shark & Gandalf. The crowd, as you can see, was not very animated.

Note: I've been looking for these pictures ever since I started The Blob. But when you have several thousand photos in trunks and storage boxes dispersed throughout the property, it is like looking for a needle in a haystack. Or a Lego-head in a pile of poo. It took Dau.II's dogged perseverance to gather all the photo-bins and go through them systematically to turn them up. I have, after 20+ years achieved closure on that chapter in my life. Happy out!