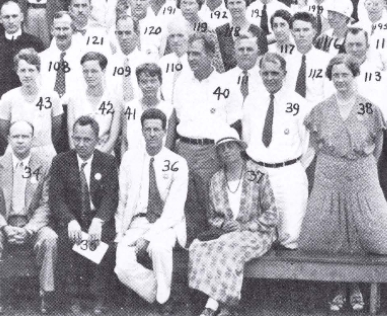 If you care anything about the history of genetics, you'd want to have been a fly on the wall at the Sixth International Congress of Genetics hosted by Cornell University at Ithaca, NY in the last week of August 1932. Someone took an official group photo of nearly 400 of the delegates which required herding the cats into a block 40 people wide and stacked 10 deep. Too large to give each one more than 2 pixels per face on a low graphics quality medium like The Blob, but we can zoom in to some interesting areas. Above:Creighton, HB; McClintock, B (August 1931). "A Correlation of Cytological and Genetical Crossing-Over in Zea Mays". Proc. Natl. Acad. Sci. U.S.A. 17 (8): 492–7 was the first description of chromosomal information exchange - a driver for generating diversity for evolution to act upon. 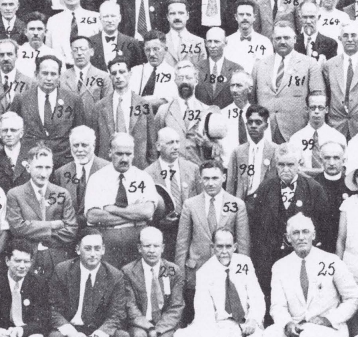 Nearer the centre are the knobs

Sewall Wright must have mitched off early, because he isn't in the official photo despite presenting one of the key visualisations of evolution in action at this meeting in his paper about adaptive landscapes. "The roles of mutation, inbreeding, crossbreeding and selection in Evolution". This showed that, even if natural selection worked perfectly to improve the fitness of living things, nevertheless we might finish up with a less than perfect solution to The Evolutionary Problem of surviving long enough to get off at least one shag resulting in offspring that are "better" than their parents. Wright, Haldane and Fisher were the numerate triumvirate who in the 1930s put manners on genetics and evolution by providing a mathematical and statistical framework for biology to show what could, and could not, happen in real life.

This is the session which everyone wished they had been at:

Nikolae Vavilov, who he? to get top billing with Fisher, Haldane and Wright. Vavilov Николай Иванович Вавилов was a senior and widely respected geneticist and agronomist who was a) trying to improve the state of Soviet agriculture using genetics and selective breeding b) boost the press image of the USSR abroad. At Cornell that Summer, he proposed to host the Seventh Congress of Genetics in the Soviet Union in 1937. There was some dissent but this proposal was accepted at the Sixth. Vavilov went home and won the support of the Politburo, was elected Chairman of the 7th Congress, and started to get the scientific and logistical ducks in a row in Leningrad and Moscow. However, in November 1936, the Poliburo abruptly cancelled the Congress, which was postponed and held in 1939 in Edinburgh. Vavilov had transgressed Stalinist ideas of how the world should be by attempting to show how it was IRL. His political masters refused him leave to attend the Edinburgh Congress, where an empty chair was placed in protest and his honour on the dais.

Stalin had been schmoozed by an idealogue and data-fixer called Trofim Lysenko Трохим Денисович Лисенко [politprev] who maintained that by altering the environment plants could pull themselves up by their phenotypic boot-straps and breed true to Marxist expectations, without the baggage of ancestry and inheritance. Vavilov was arrested in 1940, sentenced to death in 1941. This sentence was commuted to 20 years in prison where he died of malnutrition in 1943.