Skellig Michael Sceilg Mhichíl is one of those island cases where the surface area is surely greater than the 22 hectare satellite footprint because so much of it is near vertical. My calcs at that link are at variance with estimates from math-heads and cartographers, who know what they are talking about. 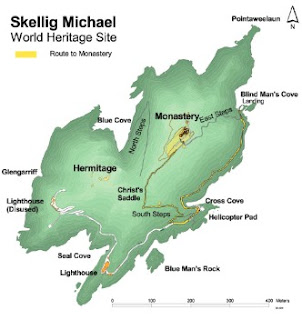 Map attrib.  It is one of the remotest and least habitable places available and [so?] was chosen to host a small colony of monks, maybe starting from the 500s CE. But the earliest documentary evidence of a monastery is when vikings sacked the place in 823 and 838 CE. And the monks finally up-stakes and left at the end of the 1100s. That's 300+ years of continuous habitation; and I guess they ate a lot [every day is Friday] of fish and seabirds because everything else had to be scratched from the surface. The island was a place or pilgrimage long after the monks left but I hope that visitors from the mainland brought a bag of honey bannocks or a bit of ham to share when they landed. It is notoriously unreliable for landing: a storm can blow up in the 90 minutes it takes to come out the 12km from Portmagee and there's nothing to do but go back again. Chekkitout on GoogleMaps: they've sent a few streetview cameras out there which indicates just how many tourists you may expect to share your visit with. 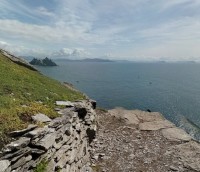 Little Skellig Sceilg Bheag [dark blob L] is smaller (8 ha.) and not just because it is a mile distant. It also hosts the largest colony of gannets Morus bassanus in Ireland; and is [therefore?] off-limits for tourists. Nobody lives on Great Skellig year-round any more but wardens have been installed during the Summer months and one of them Robert L "Bob" Harris worked there for 34 years! from 1989. It's a bit like Jim Henterley fire-watching on Desolation Peak in Washington State: you're on your own for most of the time but visitors appear erratically. Harris has written his sojourn up in the book Returning Light (2021 HarperCollinsIreland). This is nicely produced with a section of glossy colour photos in the middle and some line-drawings by Karen Vaughan. HarperCollins is a publishing behemoth capable of providing editorial support, so I couldn't find any typos. 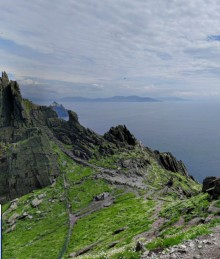 I think it's rather wonderful that a life-time spent in a remote and intrinsically interesting location can read ever so slightly boring. Verbatim diary entries, even if severely editted for flow, are not the most coherent way of telling a story. But then again, there is no story: life on Skellig in the 20thC is The Weather, first and foremost, and The Wildlife and then nothing. Nothing exciting like a Viking raid. And the interactions with the other wardens, the lighthouse maintenance crew, and the hordes of rubber-neckers are washed out into a barely visible background. Only Owen Walsh, the skipper of the Agnes Olibhear gets a bigger part than the chorus. The diary entries are leavened with loonnngg scads of Bob's poetry which may, or may not, be as good as Seamus Heaney's. I skipped all that introspection; rushing on to the next encounter with storm petrels Hydrobates pelagicus or baby puffins Fratercula arctica - much more engaging.