The smell of rain

I continue to plumb the depths of free non-fiction audiobooks available through Borrowbox. Every time I login, I am assailed with ranks of new acquisitions in the fields of murder, bodice-ripper and celeb culture but I have to scroll through pages and pages of fluff to get at science, history or geography.  You might think that What does rain smell like? 100 fascinating questions on the wild ways of the weather by Simon King & Clare Nasir, read by the authors, would be my jam. And it is, but there is much to diss about the book and its delivery as well.

As an example, I fired up the next chapter as I set off to drive to Wexford a couple of weeks ago and managed to simultaneously tap the Go Back One Chapter button. It's 40 minutes from our gaff to the train station in Wexford and it wasn't until I crossed the ring-road that I twigged I had heard it all before. That's a measure of how in consequential the steady drone of cumlonimbus, cirrus, stratospheric polar vortex, dust-devil, climate, greenhouse, hurricane can be. cumlo? yes indeed, that slurry, elision of syllables is endemic in the reading. Why oh why can't people pronounce their final Ts? Have they no consideration for folks who are less fluent in English; for whom word breaks are key to grasping meaning. It's not a particularly damning indictment that I fell into a drooling sleep while listening to an audiobook - that's normal; but given my experience of double chaptering it didn't seem worth the effort to rewind and listen to the bits I'd missed.

Scientists are, in general, crap at explaining their stuff to outsiders. Apart from The Curse of Knowledge, they often don't know what is normal knowledge among the newspaper- and book-reading public and what is arcana known only to adepts. Thus in an early chapter, "slant" is glossed as "at an angle" but 2 sentences later micron is used without any qualification. A micron is a millionth of a metre and part of the metric system. All of science, including meteorology, is based on metric and SI units; it is therefore weird for these two paid-up meteorologists to be using miles so much. Maybe they hope for big sales in  the USA. 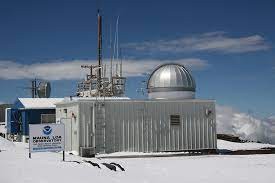 Another gripe, especially for an audiobook, is the inclusion of tables of numbers - those spelling out the wind-speed boundaries for different categories of hurricane? Really who cares in that level of detail? Only nerdniks, and they aren't going to read a book that sees the need to define slant. This level of detail is super-sketch in a chapter talking statistics about other planets . . . on the excuse that they have weather too. King and Nasir here lift the numbers out of NASA or Wikipedia to report that Mars is 227.9 million km from the Sun. But the orbit of Mars is eccentric and varies between 206 & 249 million km during its 687 day journey round the sun. 230 million km is plenty accurate and more memorable . . . and Jupiter is 3½ times further out into the cold depths of space. And while we're here Mauna Loa [above R] is not "an island in Hawaii" but a peak on an island in Hawaii.

tl;dr: worth the effort (it's not very long) if you really know buggerall about the weather.