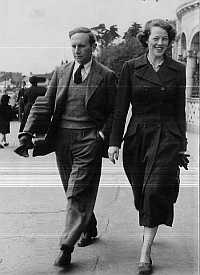 My folks were married in August 1950 after a bit of a whirlwind courtship having met in Dover in March. In May, at Lyme Regis on the Dorset coast, he went down on one knee to propose and she accepted. The picture [R]was taken about that time: probably in the cold [note gloves: d'ye think they might have been holding hands moments before being surprised by the photographer?]; and possibly on the Front at Weymouth where they had their first home. Before three children came along to cramp their style, most weekends they pootled about the rolling hills and hidden valleys of Dorset in a little Austin A40 through Ryme Intrinseca, Shitterton, Bere Regis, Lytchett Matravers. Always together, sometimes in company of rivals on treasure hunts picking up clues from weather-vanes and pub-signs. They were good at puzzling things out because they were curious and read a lot and had travelled abroad during WWII and afterwards. I'd willingly recruit either of them for my pub-quiz team. Well I can't have that now because my father died on this day in 2001 and my mother died 19 years later just a week ago: 80 days shy of her 100th bday. Since being widowed, she had been living at home looking after herself: latterly subsisting on a diet of Port Salut, spinach and trout, with posset to follow. At the end of August last year she had a medical crisis, was hospitalised, patched up and discharged to a care home down the road in the next village.

To be frank, the Old Vic could be a bit scatty about delivering the meds and adhering strictly to special diets but you couldn't fault them on the caring. The staff had time for a chat. The Polish chef was always distributing slices of cake and petit fours, often personally; he too had time to chat. For  the first few weeks, my Mother was having a great time. The stress of shopping for trout and spinach when she was too blind to read the sell-by dates; and cooking the stuff without missing the saucepan when pouring sunflower oil; and washing dishes and finding a cleanish plate . . . all this fell away in the Old Vic. The food was hot, tasty and varied, someone else washed the dishes . . . and the en suite; and helped keep her clean and presentable. But after a short time eating in the communal dining hall ceased to be fun - "everyone else is deaf or demented, or both, so it's hard to hold a conversation". After one particularly unfortunate placement opposite a demented old lady with a hacking cough - "it was like trying to picnic in a hail-storm" - Mum elected to take her meals in her room. By late November she was reflecting that the four walls of her bed-sitting room were all the view she was ever likely to see. It wasn't strictly true: the room had french-windows giving onto a covered veranda with a rose-garden and a duck-pond beyond; and between a couple of tall trees the start of a rolling farm-stead with occasional cows.

A couple of days into the New Year, her symptoms returned in dramatic and painful fashion. She refused further interventions, especially going to the hospital which had killed her husband and settled in to await the end. It took a week to come and was not without struggle, confusion and turmoil, but with her much loved and total caring daughter at her bedside " . . . peacefully breathed her last at 0337 today; it was very quiet and simple. Outside there was a wild, warm wind in the trees so we opened the French window and let her fly free over the hills of Dorset which she loved".

I liked that touch very much, not least because it's not very British; although opening the window to let the soul out is traditional across Scandinavia  and rural Ireland (at least). I mentioned this to a friend who has strong connexions with the Connemara gaeltacht and she shared a story of her older brother holding vigil with an old neighbour's family as she measured out her last hours. The breathing stopped; one of the sons discretely opened the window-sash and everybody set to with a decade of the rosary . . . only to realise that their [g]mother had joined in. It was Winter, it was cold, the window was discretely closed again.

I could not forebear to add  "Nevertheless, I will share a nice story that was going the rounds when I started working in St Vincent's Hospital in 2001. In 1990, Ireland did surprisingly well in Italia 90, that year's World Cup soccer tournament. An elderly lady was occupying a hospital bed for her last journey surrounded by her anxious family. As the time for a crucial Ireland match approached, she told her sons and daughters to go off and watch the match in the common room "sure don't be worrying about me". After the game, her rellies trooped back somewhat sheepishly having had their priorities exposed.
"How did we do?" murmured the old lady
"We won on penalties" they chorused
"I'm feeling much better, so; is there a cup of tea to be had?" The restorative power of tea (and soccer) worked its magic, she was soon discharged and lived on for several more years."

And did someone mention French windows
Posted by BobTheScientist at 07:27