The 'cuisine' of Britain (the big bit split 3-ways England Scotland Wales) and Ireland (the second biggest bit to the West) is effectively the same. In the interest of political sensitivity I have called the whole area WEA Western European Archipelago; culturally and in the kitchen there will be no effect from Brexit. There are some regional variations -
. . . but even they are getting eroded as the big supermarket chains want all their outlets to stock the same stuff. Nobody would claim the cooking hereabouts is sophisticated: good plain cooking is about the best you can hope for although you're more likely to experience a lot of stodge and over-cooked vegetables. Since I was born (it's coincidental rather than causative) a wider variety of food has become a regular part of the diet of ordinary people. Pizza; chicken tikka masala; spaghetti bolognese caused consternation when Brits first met it but it's now reg'lar spag bog; why just three days ago I had dish of moules à la sauce au vin au basilic tomate in Tramore!

We do like our creamy desserts though - heck even people with a full set of teeth will order mousse or crème caramel. When we were kids we'd often make up a bowl of Bird's Instant Whip by pouring the contents of a packet into half a pint of milk and whisking like buggery. They don't make it any more, probably because its emulsifiers were all diverted to the paint industry. If Bird's Instant Whip is sooo last century then mousse is also showing its age. Some marketeer has recently decided to launch something called posset for young and hip and fanged.

Posset has an even more venerable tradition than BIW but not as we know it. In Olde Engelande folk made posset by curdling hot milk with wine or beer, adding nutmeg and chugging it down as a slobbery liquid; especially for people feeling under the weather. Take cowe Mylke, & set it ouer þe fyre, & þrow þer-on Saunderys, & make a styf poshotte of Ale. Nobody is going that route now we have paracetamol and aspirin, so the word posset has been looted for a 'sophisticated' mousse / milk pudding / blancmange. Syllabub! You first heard it here; it will be soon in a deli near you looking suspiciously like a 1980s mousse.

When I was over with my mother at the beginning of May, I found a full fridge, with some food perilously close to the sell-by date. I did my best to rotate the stock and eat the stuff nearest the edge first; obviously giving my aged mother first dibs if there was a choice: it's her house after all and her immune system isn't what it was. I'm an old hand at this; making something hot and tasty for Pat the Salt's Sunday Supper without rushing off the shop for more food. Accordingly I ate (on successive days, not all at once!) a couple of chocolate mousses which were on the cusp but perfectly serviceable. 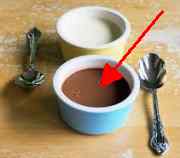 My mother had the Salted caramel and chocolate posset: [arrowed L picture from IcePandora who likes them too] A blend of salted caramel and chocolate made with the finest Cornish sea salt. Absolute bloody nonsense: what's wrong with Dorset sea salt? Why go two counties to the West for the salt? This salted caramel is A Thing nowadays. For some reason salting caramel makes it more grown-up. Caramel is super-tasty and we all love it but boiling up sugar till it goes brown [= caramel] creates some nasty chemicals some of which are potentially carcinogenic. Salt whether brined out of salt-mines in Siberia or Cheshire or created by pixies in Cornwall is sodium chloride and humans have a taste for it. When we came down from the trees, salt was in short supply so we are programmed to eat it when available. We now have as much as we want but getting rid of the surplus puts a big strain on our kidneys which are really only designed to pee out about 5g a day. Next time you're in the kitchen weigh out 5g of salt and see how little it is,  Here's the ToC for Pots & Co's Salted Caramel and Chocolate Posset [which weighs in at 100g):
Whipping Cream (Milk), Belgian Milk Chocolate (25%) [Sugar, Cocoa Butter, Whole Milk Powder, Cocoa Mass, Emulsifier: Soya Lecithin, Natural Vanilla Flavouring], Whole Milk, Double Cream (Milk), 56% Belgian Dark Chocolate (9%) [Cocoa Mass, Sugar, Cocoa Butter, Emulsifier: Soya Lecithin, Natural Vanilla Flavouring], Caramel (6%) [Sugar, Glucose-Fructose Syrup, Water], Free Range Pasteurised Egg Yolk, Unsalted Butter (Milk), Cornish Sea Salt (0.5%).
Whoa!? That last item is 10% of your salt allowance for today. And the stuff in bold are, as is now required, the usual suspects for anaphylactic shock potential allergens. I've had a go at these long long ingredient lists before - Pizza - Tarte au chocolat - Sou'wester cake - and have to say that the Lemon and Lime Posset (which my mother doesn't like quite so much) has a much shorter ToC.

But I can't leave Pots & Co without unpacking their packaging. Each of these desserts comes in a nice ceramic ramekin - colour-coded so you can be sure what you're eating even after discarding all the wrapping. I don't know, you don't know, how much of the product's retail cost is from the cream and the Cornish sea salt and how much from transport, marketing, product development, pensions, profit and a ceramic pot with each serving. But these desserts retail at £2 each!  You may compare that with chocolate mousse which sells for between £0.08/100g and £0.70/100g.  The back of an envelope suggests that the extra £1.00+ you spend on Pots & Co posset gets you a dinky ceramic pot which will probably finish up in a land-fill . . . despite the company making some pretty lame / weird suggestions about what to do with them after they've been through the dishwasher. My mother has a short stack of the things in the garage. If she didn't already have a life-time's supply of butter dishes, they'd be just the ticket.

Posted by BobTheScientist at 08:22