B is for Archivist

Like I said, my mother died earlier in the month; in England so the whole process of wrapping up has been a long drawn out affair. I don't think that the process of dying takes longer in Ireland or England: that depends far more on the consultant in charge of the hospital bed and how willing s/he is to accept that This One is not going to make it. An almost retired pal of mine who works as a GP in the country shared a reflection from a previous even older incumbent of that GP practice. Towards the end of his 60 years of caring for his neighbours he became increasingly reluctant to send any of his patients to a nursing home, let alone hospital. "I've seen too many farms eaten to nothing to pay for medical expenses for someone who will never get better." The family cannot easily articulate such a thought because they care, but also because [some of them] need to be seen to care. It is often the son, daughter, niece who has been living and working furthest away who is most insistent that Mam gets Everthing the tax-payer, through the care-team, can thrown at her.  It's so easy to be demanding when you don't have to change the fouled sheets yourself

My mother tried it both ways:
Accepting in September a non-surgical intervention that would deal with the immediate, distressing and dull-aching symptoms.
Refusing further treatment when those symptoms returned four months later with a great deal of mess and pain.
Four months is a long enough time to reflect on your own mortality if you allow your intellectual mind to process the data and damp down the emotional turmoil of having to confront oblivion.

My brother and sister and I had agreed to spend a weekend together in the old house a) to please our mother with the idea that we could act like a family b) to process some of the accumulated gubbins that our parents had accumulated since they were born in 1917 and 1920. Cunning plan a) only happened if you believe in an afterlife but we definitely put in two days going through boxes and suitcases of Stuff . . . together. Well, formally and pedantically, we were mostly working in separate rooms to get space to create different stacks: discard - discard confidentially - for him - for her - for me - for more distant rellies - for outside bodies. 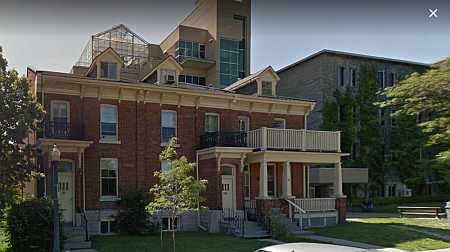 One of my coups was to unearth a letter sent by my father on 9th April 1957 to 106 Barrie Street, Kingston, Ontario. That's where we actually lived when my father was stationed for year in Canada to represent the UK Navy in a long-running NATO think-tank and planning exercise. #106 has been demolished and replaced by the the grey 4-storey apartment complex visible behind the photograph of #98 and #100 [above]. A few years ago, I was expected to report every address I'd lived at since I was born to prove that I wasn't going to abuse any young people I had to work with. I phoned my mother to ask where we had lived in Kingston, ON about 65 years ago. She said it was opposite a park in the oldest part of the city. I went on Google maps and reported #7 Rideau Street as the place where I first ate [part of] the contents of a sandpit. I was only 800m off target in a NE direction! That would have been a mighty score for Geoguessr. I shall write to the Gardai immediately, confessing my error, asking for the record to be amended and hope that the paedopolice don't come and take me away.

I have brought away a short stack of 5 decades worthy of my own dutiful letters to the honoured parents. The pathetic illiterate scrawls of 10 y.o me eventually started to fill out with biographical data when I took myself in hand at the age of 15 and developed a script that was fast, neat and legible. I am under no illusions that anyone is going to want to research or write my biography but I am now trying to add dates and places to the letters, so at least they will be in chronological order. The family policy quickly agreed that letters and cards to the parents from people we'd never heard of could be dumped. Photographs, especially if pre-WWII were given a stay of execution in case anyone from the wider family might recognise their own parents. But really, a picture of a Victorian gent leaning against the edge of a portico with no attribution on the back, what use is that?

Note to archivists: date, name, place on the back of all photos.
Too many photos for this to be feasible?
Bin them all!
Posted by BobTheScientist at 07:08