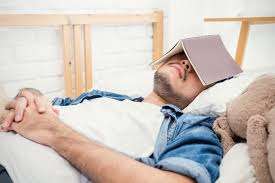 Before Christmas, last year (same thing) I exhorted you to take part in a crowd sourcing science experiment about sleep quality. Pray correct me if I'm wrong, but nobody obeyed orders! Because the participant counter is still reporting N = 950. Actually I think that their counter is likely banjaxed because it failed to up-tick since I signed up. The deal was to ask if reading for a few minutes in the bed has any effect on the quality or duration of sleep. Because the organisers would rather get a little data from a lot of people, the experiment was simply structured and of short [7 nights] duration. I was tipped into the experiment because Dau.I had just completed her participation week the day she arrived to spend Christmas in the home place. She was still here a week later as I was completing the wrap-up survey; and was able to pull me up from entering false data for:
Q. How many nights /7 did you sleep in your own bed at home?
A prior request/requirement was not to start the clock on the 7 nights of observed sleep until you were confident that you would indeed sleep in your own bed at home. There are obvious good reasons for such a stipulation because most people sleep less well in a strange /hotel bed than in the familiar surroundings of home.

For pedantic honesty, I didn't sleep in my own bed once during my sleep-science week. That's because rolling hordes of family were due to spend nights with us over the holiday period and the Master Bedroom in the West Wing had been sub-let to The Boy, The Boy's Beloved, Gdau.I and Gdau.II. I think I scored one night sleeping through in the same bed as The Beloved (mine, not The Boy's!). We had full bed occupancy, including the sofa downstairs, for most of the nights. On Christmas Eve I had to bunk off to one of the sheds in the middle of the night because  a cacophony of snoring, infant insomnia, wailing and gnashing of teeth made sleep in the house insupportable. Skittering mice were making their own party out there but I knew they'd be much smaller than me if it came to a fight. Then I had a half night on Gdau.I's bed after her family had gone off on their social round. And I finished the week in the middle bedroom after The Beloved came down with a debilitating dose of influenza. That's the can't-get-out-of-bed-my-bones-ache 'flu, not an I-gorra-sniffle man-'flu. That tallies up to four different beds in seven days.

And now taRAA! the <over-sharing alert> results for me:
I was only able to capture all that data because I kept a sleep diary for the week. Some of the intermediate wakes were due to having galumphers on the premises who don't know where the creaky floor-boards are. But there's some interesting data hidden in the table above. on the last night, I woke up at 0459hrs. In the past that would have been quite enough ZZZZs for me and I would have sprung out of bed to get on with the bloggin' day. But since my Matthew Walker transformation, and partly because I had no work to go to, I had a pee and then went back to sleep. It was almost day-break when I resurfaced and I must have gotten in an extra cycle of REM-sleep which is no harm for anyone.
Posted by BobTheScientist at 07:30