We could weather a lot of the crap that dumps on us through life if only we weren't already compromised in some quite distinct way. Being caught outside in a deluge is okay if you've packed an umbrella; you don't get Guillain-Barré syndrome unless you've been struck by Campylobacter or HPV vaccine AND you have a genetic pre-disposition. Did someone say vaccination? Seems that for some people, 'flu vaccine can trigger narcolepsy. I've had a lot to say about the microbes of our guts and how they affect our health and happiness. Why just the other day I reported that some people will gee up their immune system to an annoying intolerance of gluten IF their immune-system is programmed to react in that way to the natural (and almost always benign) zoo of bacteria in their guts. At the end of that essay, I suggested that it was diffcult to precisely promote the death of baceria known to be harmful, but that you might be able to preferentially feed 'good' bacteria.

Two days later, because the internet loves me very much, up popped a story about that very matter. It was doubly interesting ecaue I've got a final year project student who is looking at the genetic make-up of viruses which infect Listeria monocytogenes she is also looking at the mechanisms that Listeria uses to control the depredations of, and limit the damage caused by, these infectious particles. 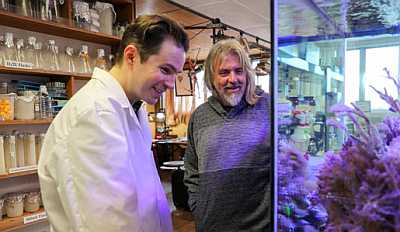 A group of microbiomologists from San Diego [press release / exec summ] led by Lance Boling [L above] in the lab of Forest Rohwer [R above] have coursed over the literature to identify 100+ foods and food products that are claimed to be specific for affecting the microbial community in the gut. Among these foods are Stevia, a key ingredient in Gwyneth Paltrow's woo-wah fashion-accessory 'foods' or Goops as she prefers to market it. Other tested foods include citric acid, caffein, capsaicin, cabbage, cinnamon, clove - and that's just the Cs.
They have then tested these compounds to see
a) whether they killed such bacterial star players down there as Bacteroides thetaiotaomicron [prev] Enterococcus faecalis, Staphylococcus aureus and Pseudomonas aeruginosa.
b) whether the bacteria grew better "yumm: send more cottage cheese"
c) whether and how they affected the viruses that they deduced from sequence analysis infected the bacteria.

One of the key metrics used by Team San Diego  to count the cases of the change from lysogeny to the lytic phase of the viral life-cycle. Lysogeny is when the virus genetic material is physically incorporated into the bacterial genome where it lies dormant; getting replicated passively every time the bacterial host divides. This can go on forever . . . until something induces the virus to excise from genome, actively assemble dozens of whole viral particles and burst out of the bacterial host to infect dozens of other bacteria. That 'something' trigger might be a sense that the bacterial host is in trouble and like to die. The virus would be better off if it sent a great many descendants out to try their luck in the cruel world than passively wait for the end with and in the current home. This make copies and scatter is called the lytic phase, because it involves the lysis of the bacteria.

The original paper, replete with data and informative graphs is freely available, so you may go and mine the horse's mouth for things that you may like to include in your new rich and varied and pre-biotic diet. You may bet that there will be some problems with replication - another strain of Bacteroides thetaiotaomicron might have a subtly different genetic make-up but this is grist to my mill of reflection on the relationship among diet, microbiome and health. It's in the detail: Arctostaphylos uva-ursi [bear-berry] will cause massive virus induction in Bacteroides thetaiotaomicron but tends to prevent this bacteriocidal phenomenon in Enterococcus faecalis and Staphylococcus aureus. If one food product doesn't do much then there is always the possibility of synergy on the plate: a salad of chicory, clove and cashew may turn out to be just the thing for duffing up Clostridium difficile.
Posted by BobTheScientist at 06:03