Don't be so negative

We had the whole descendant family visiting in series and parallel over the holidays and inevitably (with my two week event horizon) people were remember whenning . . . events I didn't recall. One of the tasks I (was) volunteered for was to mind a neighbour's dog and cats. They live about a mile [1.5km] away and Green Me decide to toddle back and forth twice a day by shank's pony, rather than firing up the Little Red Yaris to drive. To make the Winter's day outdoors as long as possible I did my pet-duty in the gloaming. To get as much positive as possible from the experience I ran down the lane [300m] recovered my wind <puff puff> and then also ran along the section of "main" road [200m, slightly uphill] to limit my time in the peligro de muerte baol báis zone. Of course, the family insisted that I wear my Farmer's Journal /RSA Hi-Viz jacket. It's a desperate bit of road for pedestrians or cattle drovers because two relatively straight stretches are connected at a junction with a blind corner: 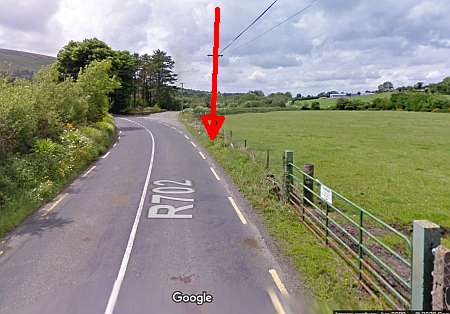 One evening, on my safe return, Dau.I shared the time when 10 y.o. her was walking the late lamented Rashers-the-Dog along that road when a boy-racer careened round the bend far too fast, missed the pedestrians by about 3m and elbowed into the fence at ⬇ stopped, got out, inspected the damage, and zoomed off on his urgent business. Not a glance at the girl  to ask if her PTSD was developing nicely!

Did someone mention the RSA, the Road Safety Authority? Every year about this time they count the bodies killed on Irish roads in the previous calendar year and see how we're doing on the lethal weapon stakes.
Because RSA is a bit dull, they just report the data with some helpful interpretive glosses. The total fatalities are up, sure, but the average loss of life for each month is the same in 2019 as in 2018. Which encourages the belief that we're about the same as last year. And indeed, statistically [5 x 2 contingency table with Chi.Sq test] showing the expected values on the assumption / null-hypothesis that the values are the same in each category:

Chi.sq = 8.2 p = 0.083. So 2019 v 2018 not significantly different overall using an appropriate statistical test. You'd be amazed if exactly the same number of people died each year, month, day, so you shd expect some differences just from sampling error and accidents like that of Boy-racer and Dau.I [above] that could have been a fatality but providentially were not.

But goddamn journalists don't do dull, they only do sensation and preferably a disaster. The Journal shamefully rotten-cherry picked the data to make this shouty headline:

Another victim-blaming headline about death-by-car.
Posted by BobTheScientist at 07:54