It's Samhain = Hallowe'en today and the kids will be out for candy and mayhem all over Ireland and the USA. Few will know about the religious significance, or even the pagan significance of the night that's in it.  Tomorrow is All Saint's Day a catch-all celebration of the First Division of Christian players. For those of us raised in the Protestant tradition, this is a significant anniversary for another coincidental reason. 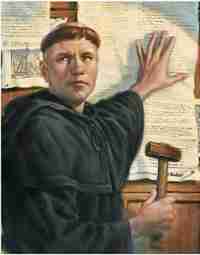 On this day, exactly 500 years ago in 1517, Martin Luther sent his critique of the Catholic church, The 95 Theses, to his superior the Archbishop of Mainz. Poor Luther he was really driven by his indignation and famously said he could do no other Ich kann nichts anders but fight the fight and prove himself right. He may also have nailed a copy of his polemic to the door of a church or churches in Wittenberg. Picture of him [L] trying the Mighty Thor look for the cameras of history. The 95 Theses picked holes or shot broadsides through the theory and practice of The Church of the time. 31 Oct 1517 is seen by many as the last time there was one catholic and universal church rather than the mother ship and hundreds of angry satellites. The change was called the Reformation but was rather the excuse for Multi-Schism. For Luther it was the doctrinal issues about Free Will [not!] and redemption by faith [so!] (that's faith working for salvation rather than by good works, compassion or sacrifice). But for ordinary folk, who baulk at the idea of transubstantiation, the Lutheran critique was mainly about the iniquitous selling of indulgences. This is the idea that those rich enough could buy time off purgatory later by paying cash now. Not to be confused with Simony, which is the selling of offices of the church. Although both sins hinge on the confusion of things of the spirit with things of the temporal order.

Whoever said "Academic politics are so vicious because the stakes are so small" [the jury is out on that] had no concept of ecclesiastical political discourse. The Great Schism which split the Church East=Orthodox vs West=Catholic in 1054 hinged on whether the communion wafers should be leavened or unleavened. The date of Easter wasn't the splitting point, that had been rumbling on for hundreds of years. Luther and his friend Johann Eck disagreed on the 95 Theses: Eck summarised  his arguments in an essay called Obelisks [R, L?] and Luther wrote his counter-arguments in Asterisks [R, R], and the discourse was at least civil. Thomas "Utopia" More [prev] was much crosser altogether, really set himself against Luther and wrote Responsio ad Lutherum. This included such magisterial statements as "Who would not laugh at the most wretched scoundrel blasting out such frenzied boasts, as though he reclined on the bosom of Christ, whereas he lies confined withing the arse-hole of the devil? Thence he farts and trumpets his splendid victories." I said . . . she said . . .
Posted by BobTheScientist at 07:01