Hello my name is

We had a visit from MR an old friend of ours who was a bit wimpy about curry back in the day. She was back in Ireland because a very good friend of her husband is dying of pancreatic cancer. My uncle went out in this way three years ago in his late 80s and it was really only a few weeks between diagnosis and The End.  That is typical of pancreatic adenocarcinoma: it's insidious. A bit of jaundice, loss of appetite and/or weight, back-pain . . . these could be a caused by a number of different glitches in the system. Pat the Salt, for example had The Jaundice last June and it turned out to be a gall-stone blocking the common pancreatic duct.  Pancreatic cancer was a worry in that case, so the gall-stone was greeted with shouts of joy; redoubled when it was treated with elegant efficiency.

The problem with pancreatic adenocarcinoma is that these nebulous symptoms are often ignored or toughed out and by the time you get up and go to the doctor, the cancerous cells have metastasised to other parts of the body: in order of precedence duodenum, stomach, transverse colon, spleen, adrenal gland, or kidney. That spread makes treatment that much more difficult and the prognosis upon diagnosis is not good: 75% of patients are dead within the year. This doesn't stop oncologists have a go with the latest treatment at your expense. It's very difficult psychologically to take your diagnosis, put your affairs in order and go home to die.  Or go out and do a few things [bungey-jumping; cursing out your infinitely annoying neighbour's repellent teenage daughter; giving €100 to a homeless person] that you have been putting on the long finger - it's The Last Chance Saloon, after all. Most people submit to the blandishments of modern medicine and spend many of their remains days in hospital getting treatment or tests.  Hospital is metaphorically a long way from home. Home is your defensible space: people ring the bell and wait to be asked in. Hospital, even in a 'private' room, is an open arena in which you are a part of the furniture.

You're in the way of the cleaners. The dinner lady dumps a tray on your bed-table on a schedule determined by the trolley marshall. The ice-cream is half melted, there's crust on the gravy. She comes back at an indeterminate time in the future. Doctors appear on no discernible schedule: you only know they are doctors because they have the defining stethoscope round the neck. Once a day, the consultant will swoop in with a train of interns, students, his golf-caddy and the smell of money. The consultant will be brusque, perhaps kindly and certainly efficient but won't make eye-contact. 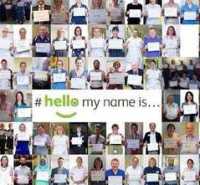 I exaggerate for effect, and it doesn't have to be like this. Kate Granger is a doctor, so she has done the stethoscope strut, but in 2011 she was diagnosed with desmoplastic small-round-cell tumor when she was just 29. Although she was training to be a geriatrician, she knew she was never going to need her own services because this sarcoma is notably aggressive. Only 27% are still alive three years after diagnosis, although survival can be doubled to 55% with chemo & radiotherapy and surgical resection. What struck Dr Granger, from the other side of the bed-sheet, was that nobody troubled to introduce themselves as they pawed over her body and talked to each other about 'her case'. She felt that this was not only bad manners, it was also bad practice. Patient engagement is a key element of successful treatment; empathy from your carers will promote engagement. Seemed a no-brainer, so she started a movement on twitter called Hello my name is which is going viral across health service providers in the UK and further afield [see thumbnails R].  There is some evidence that it works. It's simple, it's a celebrity magnet and you can download the logo to make your own name-badge.  I hope that it is a catalyst for more affective behaviour by those who work at the care-face of the health industry.  Once you've seen the effect of this small-small change in your own behaviour you can throw away the name-badge and fly solo.