I demand to have some heifers

Anyone who can count knows that there are as many boys as girls on the planet. Actually there are a few [maybe 5%] more boys born in each crop; but at the other end of life there are way more grannies than grampas and male centenarians are rare old birds indeed. In many societies equality of sex-ratio is achieved when the cohort is aged in their mid-30s. It's not obvious why this 50:50 should be so, but English geneticist RA Fisher did the maths to show why a 1M:1F ratio might be driven by evolution. In species like cattle and sheep, where one male will be inseminating dozens of females, if only he can gain access, one might wonder why all the unbreeding louche batchelor bulls are produced.

In our sheep, we want ewe lambs if at all possible: they are the breeding units and replacement stock for the old ewes as they get too old for bearing. We have not always been lucky in the genetic coin toss, with more years delivering >50% rams than the other way round: 2014 - 2015.

It's a bit more nuanced on the beef and dairy side. One key factor is the conception rate. Cows are pregnant for 9 months and come into estrus about every three weeks. If your bull is shooting blanks and you miss the first chance for getting your cows pregnant it gets the whole cycle out of kilter with the seasons. At least it is obvious - to the bull, if not to you and me - that the first try hasn't 'took' and the farmer has another chance to get a calf in 9 months time.
Hey, wouldn't it be grand if you could choose the sex of your concepti? Well you can! It's called sexed-semen and the technology has been available for more than 30 years but I only heard about it on the wireless last week. I live a very sheltered life, clearly.  There's plenty of choice at Progressive Genetics; although a sire called BALLINABORTA PRIMO doesn't sound like his pregnancies will stick. 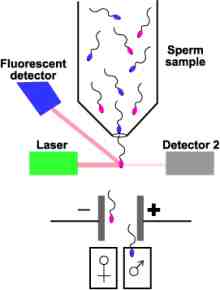 I gather that semen is 'sexed' by determining the mass of individual spermatozoa. The X chromosome is about 5% of the total genome and the Y chromosome is effectively zero [or much less than X]. Flow cytometry is a technique, widely used in immunological research, which can generate a stream of separate cells and sort them left and right as to whether they have a positive or negative charge or have absorbed more [X] or less [Y] fluorescent dye.. It's not perfect: but accuracy of 90% X or Y bearing sperm can be achieved but typically the sorting is less perfect.  Unfortunately there is a trade off: the higher you tweak the threshold for sex, the lower the actual fertility of the sperm. Imagine paying a fat premium for an AI [artificial insemination] straw almost certain to have a heifer calf and you get nothing at all for that estrus cycle. [R for method picture credit].

When you get round to deciding which bull to have a go at your cows, you're better off with data. Breeders Inc. have created an EBI [economic breeding index] which is a score in €€€s supposedly related to the added value which offspring of that bull will accrue. The EBI is based on 7 sub-indices SI : (1) Milk production, (2) Fertility, (3) Calving performance, (4) Beef Carcass (5) Cow Maintenance (6) Cow Management and (7) Health.   Health, in turn, is derived from 3 measurable adverse outcomes: lameness; somatic cell count SCC; and mastitis.  Obviously the bull himself doesn't have mastitis . . . but his daughters do (or don't); so progeny testing is an important part of the process. You could do this for human semen, but you shouldn't.