Why would you bother?

We watched a retrospective on Groucho Marx on Friday night as a way of draining out some of the accumulated stresses of life away from the sofa. Duck Soup is set in the fictional country of Freedonia. If we don't live actually in Neurosia, then we are very close to the borders and can nip across the frontier for the weekly shop. Most of our friends can tick one or more of the following boxes:
home-birth [__]; La Leché League [__]; home-education [__]; home-brew [__]; poitín [__]; rice-cakes [__]; soya milk [__]; vegetarian [__]; shit-in-a-bucket [__]; tree-hugger [__]; owns a kaftan [__]; votes Green [__]; has driven a VW minibus [__].
. . . so when we go out visiting we're likely to come back with something peculiar to eat. I don't mean snails or locusts or pancreas fritters . . . if only: I'll trying anything except morris-dancing or incest. What sticks in my craw, sometimes literally, are mady-uppy food-engineering products created by the Food&Bev industry to feed a demand and/or feed the company's share-holders. 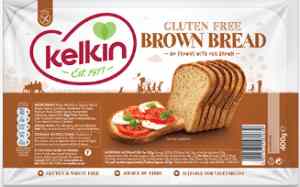 For example: a packet, two slices down, of Kelkin gluten-free Brown Bread "No frowns with our brown" appeared in our kitchen after a meeting of the local Buddhist sangha. We don't have hens at the moment and I'm not about to throw food, or even 'food', straight in the trash; so I ate it . . . toasted. It was fine. But it was about 4x the cost of regular brown bread. And, more worryingly (because we're made of money and that is not an issue), it had 4x the number of ingredients. Compare:
It  annoys me when the most abundant ingredient in any food product is water - especially when that product is sold by weight. Water is really cheap even if you have to pay for it, compared to anything else you may throw in the bowl: every ml is profit. I've no idea how much water is in my sourdough (because every loaf is different but every loaf is good) but I know it's got less water than flour. Typical proportions 3 flour:2 water. The next four Kelkin ingredients are starch, any starch, so long as it's white so long as it isn't wheat. WTF? It's brown bread: but the food engineers can >!ka-ching!< that by lurrying in the caramel. which is convenient and cheap for adulterating food to give it a homely brown colour but contains 4-methylimidazole (4-MEI) which is probably carcinogenic. Don't get all het up about that 4-MEI though, you'll create more as soon as you cook stuff in your own kitchen. All that tasty maillard browning - in toast, chips, pork-roast - is basically caramel. Here's a sensible piece on the Maillard over-reaction.

But my substantive point is that there are loads of cultures in which wheat and rye form no part of the diet. The whole of India south of the chapatti line; the whole of Central and South America with their beans, corn and squash . . . or potatoes and quinoa diets; or chunks of Central Africa scarfing down the cassava. If you really can't tolerate gluten, why would you want to eat something that looks and tastes like bread when you could be doing yourself proud with corn tortilla, rice-n-beans, or roast potatoes? [Wow! imaging having roasters every day: I could handle that]. It's like the rather sad chap we knew who came to vegetarianism late in life and used to make chops nut-cutlets, gravy and two veg for dinner . . . ignoring a super-tasty world of pakori, tacos, saag aloo, jollof rice, tostadas, dhal, megadarra.
Posted by BobTheScientist at 09:43