Them Okie girls sure is purty

The lovely Donna Axum died this month [Parkinson's] and there is one less philanthropist in Texas. I'd never heard of her, because I don't really approve of Beauty "Objectification of Women" Contests. That hasn't stopped me having a peek at the process when it intersects with STEM. Since she won the Miss Arkansas competition in 1963, and Miss America the following year, Axum has been shifting money from rich people to her alma mater U. Arkansas and also to U. Texas in which state she lived for many years. She wrote a book: How to Be and Look Your Best Everyday: A Comprehensive Guide from a Former Miss America., which I won't need because ordinary me just wants to be and look just good enough so I don't frighten the students at work, or the sheep at home.

So much for Ms Arkansas-Millions. But you can't keep an obsessive data-wonk down when Wikipedia reports that Axum was the 1st of three winners of the Miss America tiara from AK, her home state. Arkansas? Isn't that one of those rural states in the South? Didn't I apply for a job in Little Rock? Clintons? Maya Angelou? Johnny Cash? Glen Campbell? Surely not many people live there, so isn't Three (3!) Miss America's punching above its weight? It's like my analysis of Literary Prizes in multi-lingual India. Bring on the dancing data! 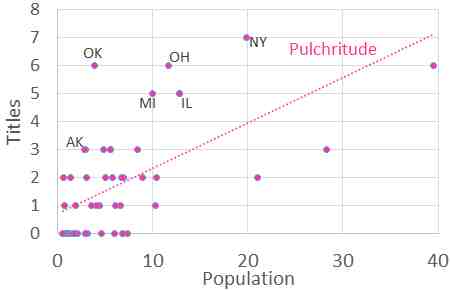 The 4 most populous states are California 40m, Texas 28m, Florida 21m, NY 20m. The rest nowhere? Arkansas has 3 million people which sounds small: but more people live in Metro Little Rock than in Vermont or Wyoming. The Great Melting [read miscegenation / outbreeding] Pot of NY is the only populous state with more than its fair share of prize winners. The graph shows that, indeed, AK = Arkansas is above average but them purty-as-a-field-of-wheat young OKie girls, they take the tiara!
Posted by BobTheScientist at 07:10