My Roomie at The Institute is running a meeting this week about nematodes as bioindicators. About 40 of the world's experts in environmental monitoring and sustainable soils with their attendant students (future experts in the field if we still have a planet) have come to Knock-na-bitheolaíocht for a few days networking and presenting their data and analyses. The meeting motored along, on time and well fed, and I dropped in and out to learn about stuff waaaay outside of my field. Someone had the bright idea of inviting an Institute alumnus, founder of Rockfield Ice Cream, to hand out free ice-creams to the delegates - they do weddings as well. I don't do ice-cream, so I was happy to give my voucher to one of our starvin' graduate students.

The first international conference I attended was in 1978 at Siracusa, Sicily. We threw a few things into our leaky old Citroen and drove 3000km across the continent to attend. When we arrived, we camped on the beach and the rest of my party swam, slept and ate pizza while I did science for 3 days. Then we packed up and drove all the way to the Netherlands for the next great leap forward. I didn't dream of getting someone to pay for my petrol and, as I was between jobs, it would have been difficult to identify a target for the invoice. It helped that there was no registration fee for the conference.

It's different now. I met my Roomie on the stairs as she ducked back to the office to photocopy the receipt for dinner the evening before the conference. Lots of delegates were planning to claim that as an allowable cost . . . but needed a receipt for their finance people. They all chipped in to pay the bill but the restaurant only uttered one receipt. I had an image of this same receipt for a few hundr€ds being presented across the free world for multiple payments but was assured that everyone would just claim their own share. The Institute has given up on such claims and give you a per diem if you're away from your desk for more than a certain number of hours. If you choose to dine on chips or out of a dumpster, then you can make a profit. You need to prove that you were away where you said you were, of course, but a copy of the programme is usually enough. After going to Galway to hang out with my mates in 2013, and claiming the per diem and the mileage, I was ahead in the wallet. I am honest (Honest!) but not so pedantically honest that I cause a headache for the accountants. Later that year, there was a meeting in Dublin. As there were a few penniless post-grads who were going as well, I piled them all into my car and drove the 80km to The Smoke to save The Institute 4 bus-fares. The students got to sing Science Songs in the back of my bus. But when I claimed for that, I was told "Duh! didn't you read Institute Policy that travel to Dublin must be carried out by bus or train". No I didn't and neither did my head of department nor the head of school both of whom were required to sign off on the claim. Filling in a form in triplicate is one thing but arguing over €20 is beneath my dignity, so I threw my claim in the bin and learned not to do any of that utilitarian greater good nonsense again. 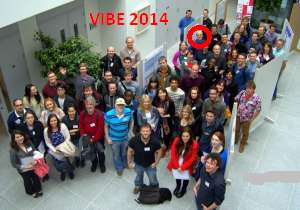 I was in Dublin a couple of weeks ago to attend a talk given by a palomino - and went by bus. At the pub later, someone told a story about me and receipts that could have been true. In 2014, I organised the VIBE gig in The Institute. - we didn't have the ice-cream gimmick but I did manage to supply tea, a tonne of flapjacks and lunch. No registration fee, so I had to shake down some corporate sponsors for the sandwiches and canapés. The following week, one of my pals the delegates, asked me for proof that he had attended the event, so he could claim the rail-fare from Dublin. I sent him the group photo [above] and invited him to put a circle round his smiling face to convince his college's auditors. I've circled myself above, in case I forget I was there, as I had clearly forgotten my witty and subversive response from 3 years ago. You'll also notice that I have corralled all the delegates into a Y-chromosomeshape to protest the overwhelming hegemony of Men in Science . . . no I made that last bit up.