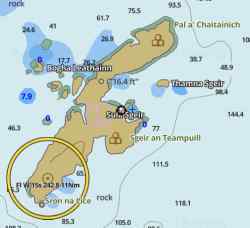 It's been a while since we had an island in the spotlight. You are invited to guess / work out where in the World is the island shown on the chart [L from 59.1oN 6.1oW].  I have been down with Pat the Salt, my nautical father-in-law, and he can be restless about the television. His common refrain is "we've seen this before", even when it is demonstrably not true - first run Attenborough, or this week's Antiques Roadshow with enough contemporary references to know that it's not a repeat. We're not sure if it's a sort of deja vu loop in his aged brain or a dismissive existential comment on the banality and repetitive nature of the medium. Peculiarly, one of the few channels that tends to keep in him interested is BBC Alba, the Scots Gaelic language channel which is the political and linguistic equivalent of our own TG4.  You can get sheep-dog trials there and documentaries about crofting and the value of urine in the preparation of Harris tweed.  Alba is an idealised and romantic view of North Britain. I switched over to that TV channel as a change from Theresa May and caught a bit of monochrome footage of some  lads unloading fish from a boat (see picture below]. . . but they weren't fish but gannets Morus bassana. I asked Pat if it was St Kilda but he didn't respond - possibly because his hearing aids are in the shop for their annual service. 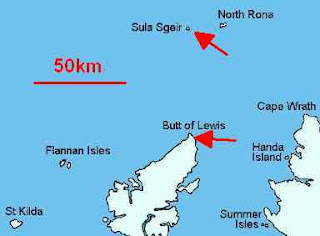 Although gannets were an essential part of the diet and getting them an essential part of the culture of St Kilda, they weren't the only people who scaled the cliffs each Autumn and killed a boat-load of unfledged gannets when they were fat and tender. I'm sure that in the distant past more convenient cliffs were exploited but, by the 20thC, the poor gannets had retreated from the voracious predator and retained a toe-hold on distant, uninhabited and hard to scale islands, cliffs and headlands.  The BBC Alba documentary was reporting on hunting the gannet on the island of Sula Sgeir ( Old Norse súla, "gannet" and sker, "skerry") by the men of Ness The two locations - 65km of open ocean apart - are indicated with red arrows R]. I mentioned Rona in passing last year and may go back there. Storms were likely to blow in unexpectedly either in the going, the return or during the 10 days of camping and slaughter, but the boats of Ness were and are dependable and sea-worthy.  Sula Sgeir is more remote than St. Kilda and much smaller [about 15 ha.] and generally uninhabited although there are some bothies, sort of weather-proof, built from the local gneiss rocks, and used during the gannet hunt. 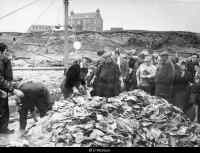 Ness is an open community consisting of about 1300 people spread across several villages which I am sure will want me to list: Lionel, Habost, Swainbost, Cross, North and South Dell, Cross Skigersta, Skigersta, Eorodale, Adabroc, Port of Ness, Knockaird, Fivepenny and Eoropie. Port of Ness is the location of the quayside where the haul of gugas [dead gannets of which the annual heap of them is shown L] is distributed among the local population. The land about Ness all 23,000 ha of it, was purchased in 2007 and is held in by Urras Oighreachd Ghabhsainn = the Galson Estate Trust. The whole of Lewis was purchased in 1918 by Lord Leverhulme with plans to develop the fisheries and boost the local economy.  That's another story for another time, but the most recent owners of land were Grahams and MacReas who had a cunning plan to develop the whole area as a massive wind-farm and were not unanimously pleased with the new legislation that facilitated the break-up of large private estates.

My father was not flattering about gannets Morus bassana; if we finished dinner in under 5 minutes, he'd compare our appetite to that of the gannet.  A gannet feeding-frenzy can lead to dramatic diving behaviour as has been noted by Attenborough. Whatever about their own voracious feeding habits, gannets are not the top of the food chain; we are. Or rather the men and women of Ness are, because they have a licence to carry on the hunting of gannets - a pursuit that has engaged local people for at least 500 years. Gannet is an acquired taste: flatteringly called salty goose but described as old leather and rotten beef or anchovy paste and full strength cod-liver oil. It cannot be worse than lutefisk. That was described by Garrison "Prairie Home" Keillor as "Not edible by normal people. It is reminiscent of the afterbirth of a dog or the world's largest chunk of phlegm."

More islands.
Posted by BobTheScientist at 07:21